Slogans “All together in the altogether” and “Living naturally without clothes” 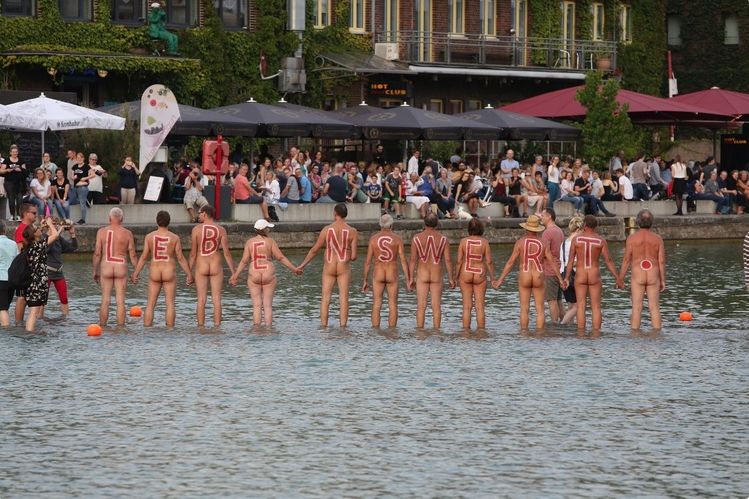 Nude life: we all together in the altogether!

Translating text might be sometimes challenging even for professional translators – it is even more challenging for others, who are not native speakers of the other language. Asking native English speakers can be very helpful.

If your interested in looking behind the scenes, just browse through the following text.

Our quest for a lively, compelling slogan on naturist life in English

We started to brainstorm for lively, compelling slogans – seperately for German, English, and Dutch – playing with words and double meanings. The motive is to find those, which attract best readers' attention, emotions, and interest, to continue browsing the natury website about the idea of a naturist lifestyle with a smile and a positive attitude.

In German, our first result – kudos to Guido for the finally convincing idea! – was to transform the title “Das nackte Leben" to the slogan “Bloß Zusammenleben”. Explanation:

“Double meanings (in English we also call them by the French double-entendres) are often to be found in publications, especially in jocular descriptions of naturism. But they have mostly become clichés that are best avoided (in my opinion).
I like the idea of trying to include a connotation of shared experience (Zusammenleben, Zusammenerleben), but I find it's just as hard to achieve in English as in German.
Perhaps surprisingly English has the slang phrase ‘in the altogether’ which means naked. So to be ‘All together in the altogether’ (‘Alle zusammen im Adamskostüm’) actually does capture what you are after, albeit in rather idiomatic fashion.
Personally I like the phrase ‘Living without clothes’, which implies living (usually social and varied) and avoids the words nude, naked and bare which some non-naturists may fear.”
– Comment: Bernard, UK

“Finding a compelling slogan is hard in any language, but doubly difficult if you are trying to translate one that works in a different language. […] So I understand and appreciate your question.[…] Personally, I would vote for ‘Living Naturally’. […]”
– Comment: Milt, USA

It is a great pleasure for us, to adopt Bernard's idea “All together in the altogether” as a lifely, compelling slogan to do marketing for a lifestyle in the buff and therefore use it as title of our informational brochure.

Also a great pleasure for us is, to adopt Milt's idea “Living Naturally” and merge it with Bernard's preference “Living without clothes” to “Living naturally without clothes” as a another lifely, compelling slogan for our informational brochure.