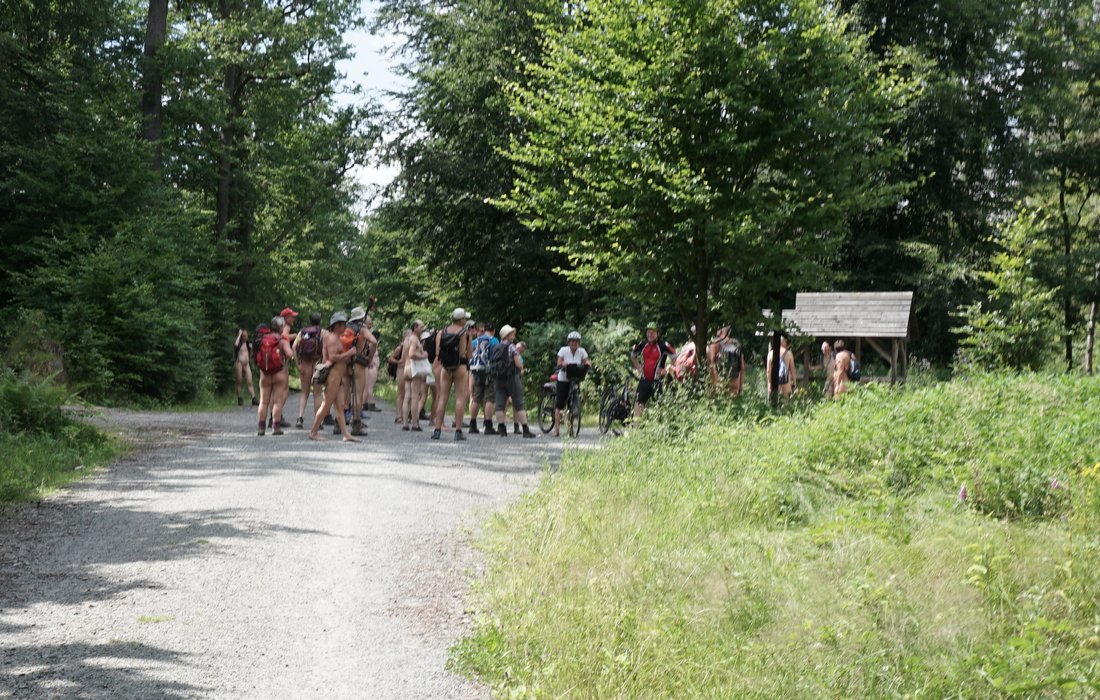 Q&A: We all together – also in the altogether!

Nude hiking – How to do that?

Nothing more natural than that: You undress and begin to hike. You talk to another and exchange thoughts. You encounter other people wearing textiles and say "Hello", "Good morning" etc. to them. Often, others greet you back. Sometimes, you might respond to questions, which textile wearing hikers ask.

Children take being in the nude for granted and have no problem at all with it. It is rather incomprehensible to children, why you should wear clothes, which are only annoying and simply unnecessary in warm temperatures. The idea, that dealing with and experiencing nudity could be a problem for children, arises only from aberrant imagination of pathological adults.

No problem! The oldest hiking with natury was at the age of 80, and natury had to use all his strength, to keep pace with him! In addition, naturists are always paying attention to others and aware to help.

Thick ones? Thin ones?

No problem. Everyone is allowed to carry their body around as they wish. Among naturists, there is only tolerance, no sniffing, and no inappropriate remarks. Intolerance may exist only among some textile wearers!

They are in minority as to the nude hiking, mostly with a part of 10 up to 35 %, only. The main reason is, that women only rarely like to come to an events alone, nearly always they come with her partner. For men it is easier, to participate alone. Thats is, why men mostly are the majority.

No problem. Apparently not elsewhere is acceptance and helpfulness so high as among naturists. Indeed, a lot of hikes take place in mountain areas and partly also on smooth ground or on bumpy small paths perfoliated by tree roots. In the vary case, just ask the initiator, if the hike might be made anyway.

Actually, some shoulders will be found to carry the tired minis for some kilometers.

They are very busy with themselves and prefer to withdraw themselves. That is why we have so far rarely had hiking participants aged between 12 and 17. But they are indeed welcome, and they can be quite sure that they will be taken seriously with their concerns and problems and will be fully accepted.

Most of the initiated hikes are between 15 and 20 km long. and that often in mountains. That requires a certain endurance. Without having that, you might need to train. However, a lot of hikes have a short-cut option, but also short-cuts might contain challenging acending slopes.

Distances over 3 up 10 km are more seldom initiated, probably in the outskirts of Hamburg at after-work hours, once or twice a month. If you live elsewhere and are interested in nude strolls, you should become an initiator of such naktivities!

In general, there is nothing to be objected against the co-hiking of four-legged companions – but as we often hike through wild nature reserves, keep them there on a leash, please! Please also take care during the hike to ensure that dogs, which are too lively, will not cause discomfort to other hikers. The wellbeing of human hikers clearly has priority in a nude hike.

Via the contact form, we will accept questions, to which we will respond individually.

Poll amongst readers of the NDZ

In August 2009, German daily regional newspaper Neue Deister Zeitung (NDZ) carried out an opinion poll among its readers on the occasion of the nude hike in the Deister mountain. The result: 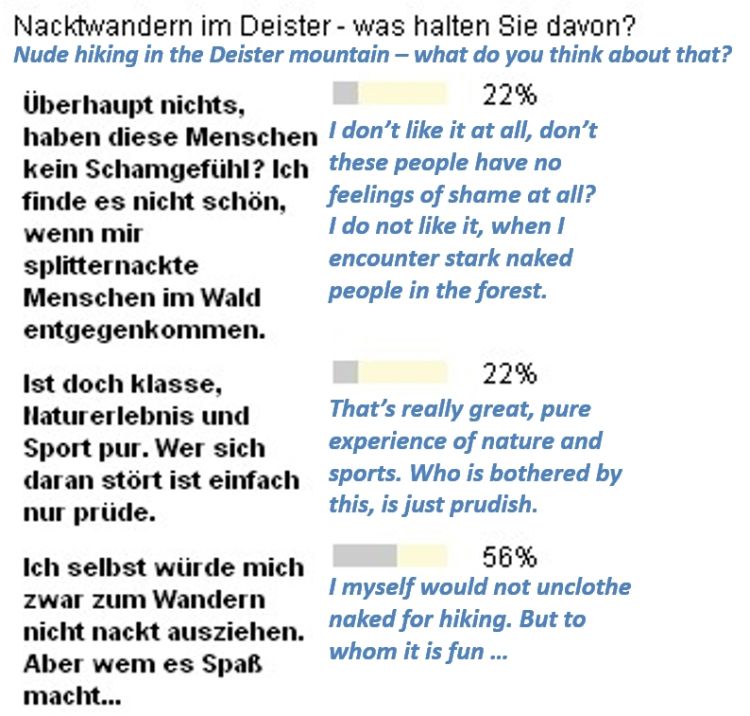 A four-headed family meets us in the Teutoburger Wald (en: Teutoburg Forest). The mother: "Children, take a closer look, this is the new poverty in Germany, they cannot afford anymore to buy clothes!" Our answer: "But it is also a lot of fun, to hike free of clothes!"

"What happened to you? Have you been raided?" Our answer: "No, a few kilometers farther, there is a clothes recycling bin, where we have donated everything, which we had with us."

"Didn't you forget something?"

"When I come home and tell my wife, she will not believe me that, may I take a photo of proof?" We allowed it to him, but asked: "For personal use, only."

"Is something special going on here?" Our answer: "No, we're hiking every weekend!"

In the Hainich Nature Park we encountered a female hiking group. When the guide became aware of us, she explained to her fellow hikers, "Ah, there we meet a group of nacked hikers. Such nacked hikes now take place everywhere in Germany!"

During a hike in the Westerwald mountains, two clothed hikers overtook our group of about 30 people, so that many nude people hiked in front of and behind them. Two mountain bikers reached the end of the group of nude hikers. One of them shouted, "And we've already thought we're clothed curtly in our cycling jerseys, but you've still topped us!" Then they reached the two clothed hikers between the nude ones. The biker asked them in astonishment: "What is wrong with you, that you are wearing something!"

In the Arnsberg forest, we encountered two woodworkers. Says one of them: "Man, that's great, how did you come to that idea?" Our answer: "It is simply wonderful, to hike in the nude through nature and to feel as part of nature." The woodworker: "May I accompany you?" "Well, pretty sure", we replied, and he began to undress. "You're at work and stay here!" The other one vigorously spoke – he was probably the manager.

In the Bergisches Land mountains, we hiked around a dam. A young woman hurrahed to us, "Wow, you really exist, are you the nude hiking group known by TV reports on WDR (WestDeutscher Rundfunk; regional public television broadcasting station)?" – "Yes indeed, that's us!"