Hinduism includes nudity as a natural base element. Regularly held cleansing bath in the Ganges river, which many millions of Hindus attend, originally took place in the nude for all, is now untertaken predominantly partly clothed due to meanwhile entered foreign influences.

Regardless of that, today monks still live specifically in the Hindu form of the Jainism in complete or almost complete nudity. They are well-known as “clothed in air“. In Sanskrit, they are called the “Digambaras“, who run their monasteries primarily in the southern regions of the Indian subcontinent. These monks refer to the founder of the religion, Mahavira, who spent 12 years nude in asceticism, before spreading the insights of his meditations and asceticism as a new doctrine. 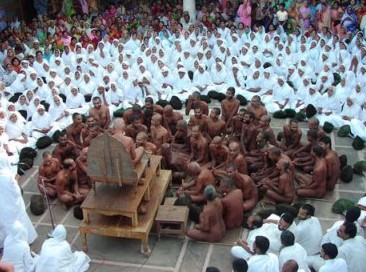 Already in the antiquity, the Greeks very well knew them as “nude ascetics of India“.

Jainism assumes, that there are two principles in the world: spiritual and non-spiritual. The spiritual is based on an infinite number of individual souls (jiva). The non-spiritual includes the five categories: movement, rest, space, matter, and time. Everything material has a soul, not only humans and animals, but also plants or water.

The original purity and omniscience of the soul (jiva), however, is impaired by subtle substances, that enter as a result of karma. The jiva can be categorised according to the respective degree of purity by colour, olfactory, haptic, and taste gradations, where i.e. the possible colour spectrum of the jiva ranges from black, dark blue to dove gray, fire red, yellow to white. Thus, a yellow mental monad attests balanced characteristic traits of a person. Any karmic act, whether intentional or not, forces one to remain in the cycle of reincarnation (saṃsāra) until all karma is paid off.

Purification of the soul is achieved in Jainism through a moral way of life and strict asceticism. When a soul is freed from all impurities, it ascends to the highest heaven to remain there in peaceful bliss. However, not all souls reach this stage. The so-called abhavya jivas (“incompetent souls“) can never be freed from saṃsāra because of their natural predisposition.