Saxon Naturist Days took place from 15 to 23 July. More than twenty stayed in a hut, another six camped, in addition, some stayed overnight in other accommodations. On some days, there were also day guests, so that we were sometimes on the way with more than thirty naturists.
Due to the characteristics
SNT 2021 is, after 2020, again in the NEWT category of reports.
After a cheerful barbecue on July 15 and a hike in beautiful weather on July 16, a storm began during dinner with enormous amounts of rain, rising streams and rivers, flooding and corresponding consequences. These days were anything but normal and showed us how small, weak, and vulnerable human existence is, how gigantic the forces of nature are.
Deeply impressed, we wished each other a safe journey, a good time, and good health at a final lunch on 23 July.
Selection of images in the full report 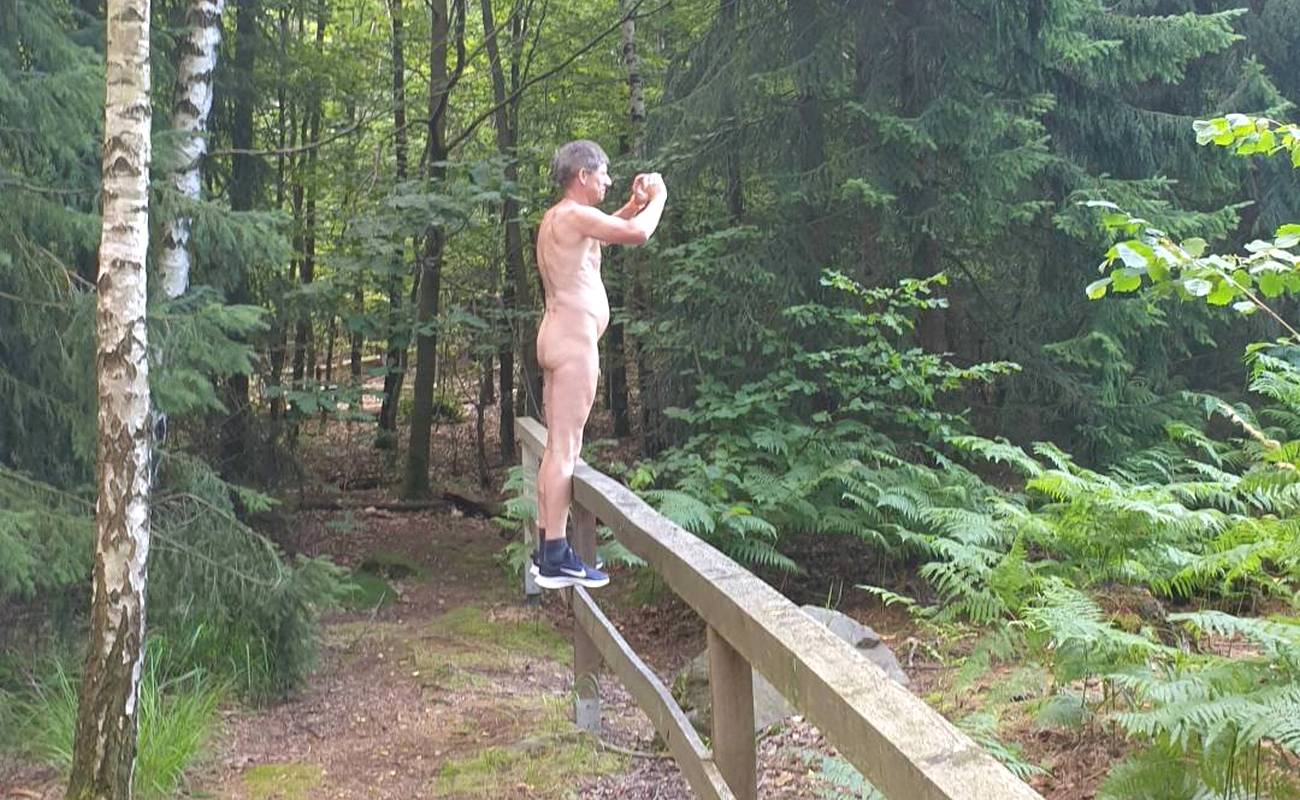 We were over thirty naturists and started near the Ottomühle mill in the Bielatal Valley to explore the relatively newly established Forststeig Trail. The ascent along a narrow forest path through a nature characterised by sandstone soon led to the first view into the Bielatal with the buildings of Ottomühle Mill. We then followed the stony Theilemannweg Trail to a moor pond, which is designated as a protected biotope. 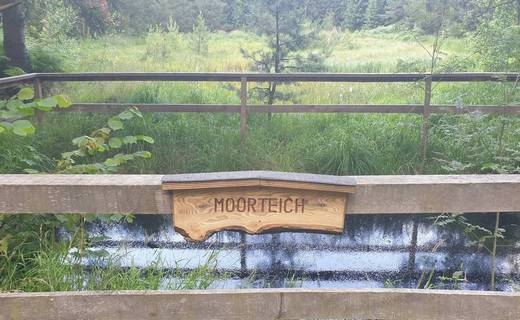 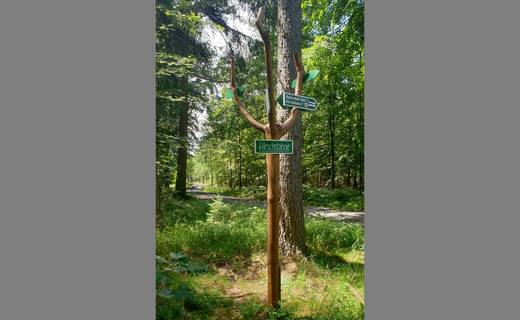 Image 4 of 13: Hirschstange [en: Deer Pole]
After 2 km, at the Hirschstange signpost, we reached the German-Czech border, which is marked here by a small border stone, and 800 m further on the Grenzplatte, a natural sandstone viewing platform to Ostrov in Czech Republic on the gentle landscape dominated by sandstone formations. Here, we met several hiking groups and couples as well as a family, with whom we had a brief conversation. 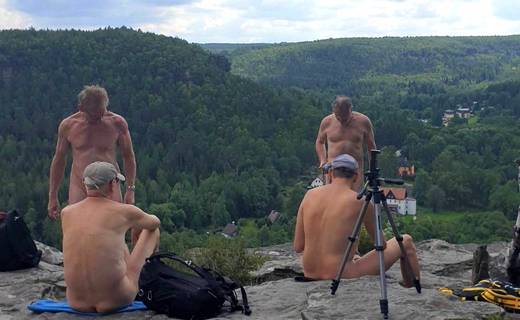 Image 5 of 13: Grenzplatte
After the rest, we went downhill quite steeply and slippery into Biela Valley, which was a bit tiring and sweaty at 28°C and high humidity. At the Biela stream, we found a place between stones in the shallow water to wash off sweat and refresh ourselves. It was pleasant and just in time for the end of the hike. On the way back to Ottomühle on a narrow path along the Biela, we discovered another artistic tribute to the

mill tradition, which is widespread here. 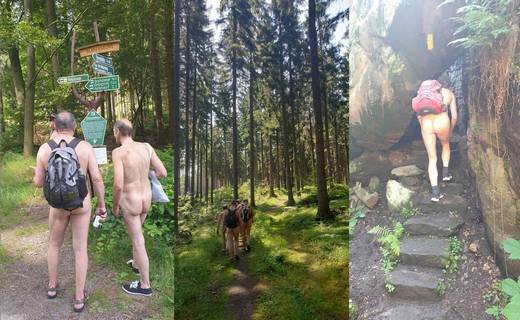 Several of us enjoyed the entire hike barefoot and rated it as wonderfully barefoot-friendly – stony passages of the paths around the moor pond were a welcome foot massage in between.
Rainer

It started to rain heavily on Friday, while we were sitting in the garden restaurant of Neumann-Mühle [en: Neumann Mill] Restaurant in Kirnitzschtal Valley waiting for dinner at the end of the hiking day. The tent roof kept the pattering rain out, but damp spray drifted through the rows of tables at times.
This rain only stopped in the night from Saturday to Sunday, boulders and half slopes fell on roads, fire brigade and excavators were in constant action. Some of us, who had parked their mobile homes at a campsite in the Kirnitzschtal, had to move very quickly to the higher part of the site – their previous pitch was already flooded. Others, who had made an excursion to Königstein, did not even make it to our holiday hut on Saturday, but found another place to stay and joined us again on Sunday.. 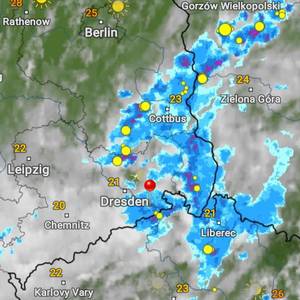 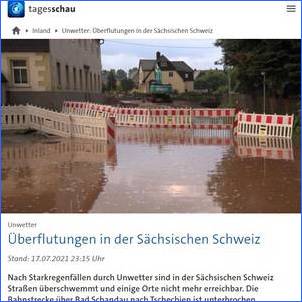 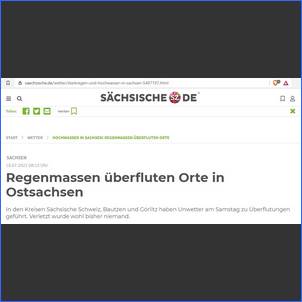 The hike planned for Sunday was not feasible, as the clean-up work in the Kirnitzschtal was still going on. We hiked from our holiday hut in Ottendorf and reached our take-off point on the outskirts of the village. Apart from a few stony stretches, which were nevertheless good to hike barefoot, we were able to enjoy mainly meadow and forest paths, which were as tender and soft as a baby's nappy due to the abundant rain. 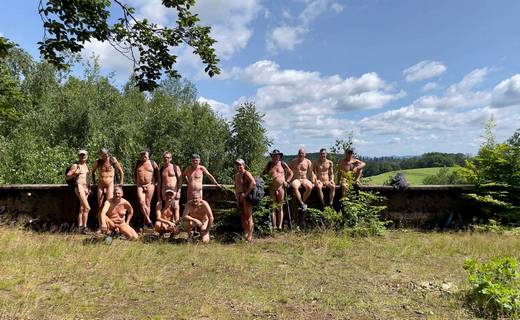 At the Großstein we had a long break, during which some of us descended to the Feldmühle in the Kirnitzschtal to explore how far the clean-up work had progressed. They were even able to actively help clear away obstacles there, so that a stream could return to its usual bed and no longer had to flow across the hiking trail. For this, they received praise and thanks from the operators. They then received the next praise from a forestry employee after they had asked a hiker to extinguish his burning cigarette.
After we were all reunited at the Großstein, we struck up a conversation with a hiker, who had already been sitting there when we arrived. Since we had the same hiking destination, she hiked back with us. She didn't want to undress herself right away, but showed interest in the nude lifestyle and exchanged phone numbers. Afterwards she had to go back home, as she had no holiday but only the weekend available for hiking. Now she can report on exciting weather events and new insights.

The public bus from our holiday hut in Ottendorf to Sebnitz could not run because of flood damage and clean-up work. We improvised a shuttle service with private cars instead. From Sebnitz, we were then able to continue by bus to Bad Schandau as planned. 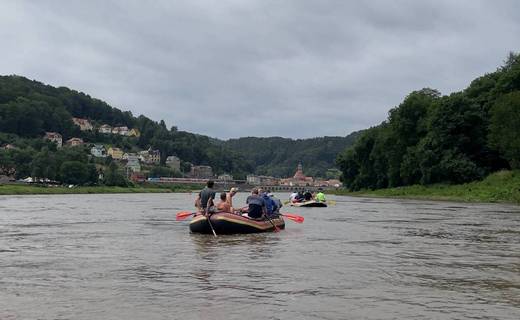 Image 1 of 3: Cool in the morning
On the banks of the Elbe River, we took over the three inflatable boats we had ordered and paddled off. Complete cloud cover and a strong, cool westerly wind caused most of us to dress with at least a warming jacket. On the other hand, the Elbe was flowing quite fast due to the high water level, so we reached up to 10 km/h without paddling very much, despite headwinds. So, longer breaks were necessary to compensate for this to some extent.

Towards midday, the weather became friendlier and warmer, and the wind died down. However, we had to do without the "last top ice cream before Italy", according to the advertising slogan of an ice cream booth at the Elbe cycle path on the edge of Kurort Rathen [en: Spa Town Rathen: The ice cream stand was closed. However, we used the meadow in front of it for a group photo. 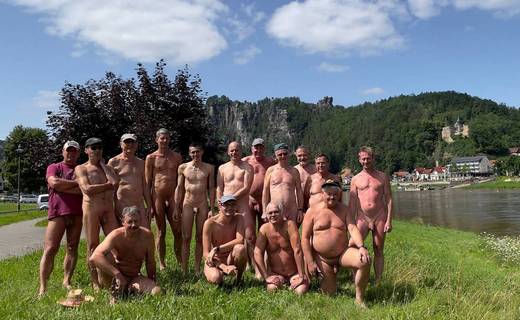 Image 2 of 3: Kurort Rathen
We paddled on, passed the tourist magnet Bastei and reached the exit opposite the town of Wehlen an hour earlier than planned. This gave us the opportunity, to take a ferry to the other side of the Elbe and make up for our failed ice cream consumption in Rathen – or to enjoy coffee and cake instead. 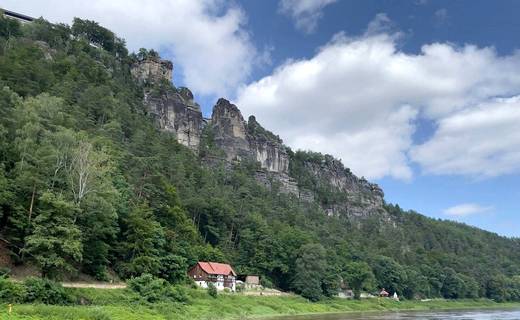 Image 3 of 3: Bastei
The excursion ended with a stop at the brewery Zum Gießer in Pirna, which we reached by public transport and after a short walk.As the introductory sentence on the website of the brewery explains: “Whoever is on the way to Saxon Switzerland can hardly get past the Pirna brewery Zum Gießer.“.

Schrammsteine have been a regular destination during Saxon Naturist Days for many years. For 2021, Martin had chosen a route, which had not been used before. You started on Jordanweg, where you went over forest soil already slightly uphill. Then you had to decide, whether you want to firther ascent over steps (Zahme Hölle, easier variant) or by climbing (Großer Dom, more difficult variant). To ease the decision, Martin had explained both options in detail in his hike description. 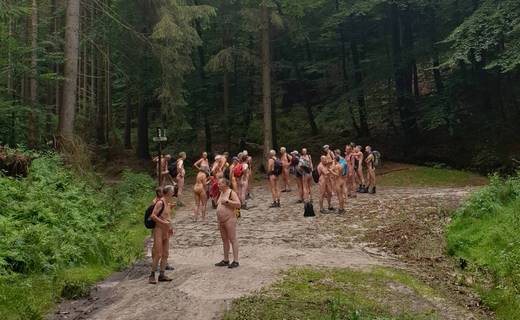 Image 1 of 10: You have to decide about your way upwards

After a first break at Carolafelsen with a wide view into the country, we first continued to an outlook at Spieß [en: Pike] and to the next view on Breite Kluft, where we positioned ourselves for the group photo. We then hiked and climbed the Wildschützensteig, whose steep ladders and stairs lead up to another outlook on Schrammsteine. For our rest, however, we chose a spot away from the crowds of visitors, whose access is somewhat hidden. From there, some of us visited the tourist viewing platform, which is secured with railings. 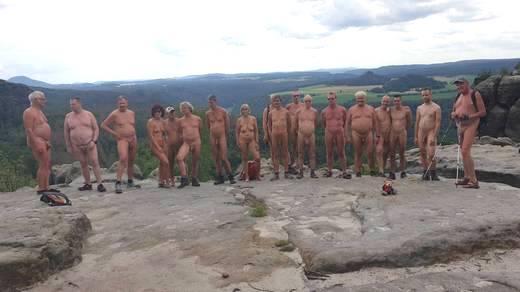 Image 8 of 10: Group photo at Breite Kluft
Finally, we set out on the last, major descent: this led down 70 metres of altitude via steep stairs and almost vertical, quite long steel ladders, and later via more easily accessible wooden steps with a smaller gradient. After another 100 metres of descent over a stony path interspersed with roots, we arrived at Kirnitzsch Stream – and, for those who wanted, a refreshing bath in its waters. 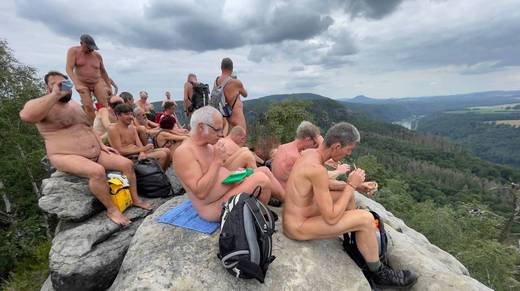 In the valley up to Schöna, we and others waited patiently until the police, technical relief organisation and fire brigade gave the all-clear and vehicles could pass: A tree had fallen and first had to be moved out of the way. We saw enormous flood consequences such as mud, all kinds of washed-up objects, but above all household goods disposed of at the roadside, which had been destroyed by previous flooding of houses. 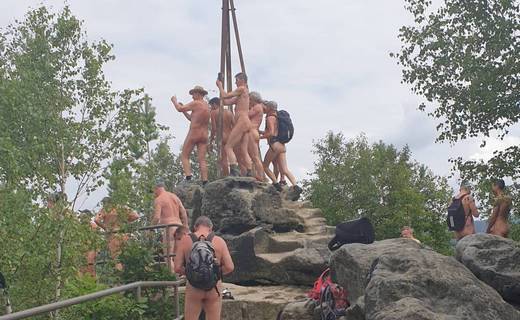 Image 1 of 9: Big crowd at Kaiserkrone

At a hikers' car park on the outskirts of Schöna, we started our hike clothed at first, as the trail led through the village for a bit, and reached the undressing point before climbing to Kaiserkrone. Kaiserkrone got its name a long time ago, because its silhouette looked like an imperial crown from a distance. At the top, there are two views on stones, to which stairs and ladders lead. 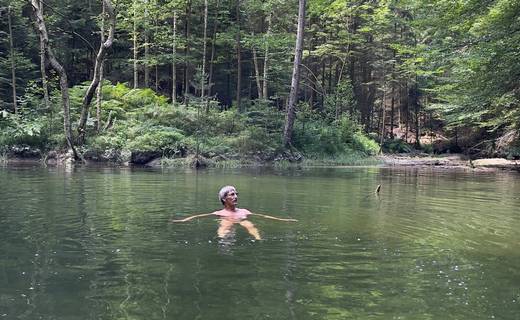 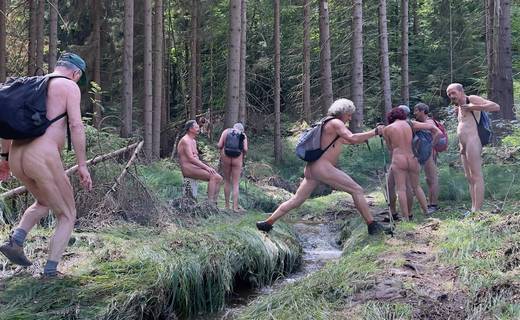 Image 5 of 9: Jump over brook and border}

We then followed the Forststeig to a pond, where we took a rest. After a while, we reached Gelobt Brook, which flows there along the German-Czech border. Due to topology and vegetation, we had to change the brook and thus the border side several times.
After that, it became gravelly: a forest track could not be avoided. At the trickling Ziska spring, designated as a drinking water source, we were able to refuel a little drinking water. Finally, we took the last ascent to the Zirkelstein via steps and ladders to take advantage of the 360° view. 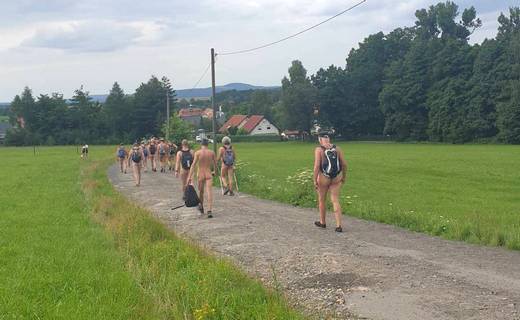 Image 8 of 9: Return to Schöna

We parked in Schmilka near the German-Czech border on the banks of the Elbe and walked dressed along the road to the beginning of the first ascent. This took place on a wooded steep slope via stairs. We didn't count them, however, you could have the impression, that it was hundreds of them. A following descent was on a gravel forest road, which required protection for the soles of the feet due to sharp and angular stones. 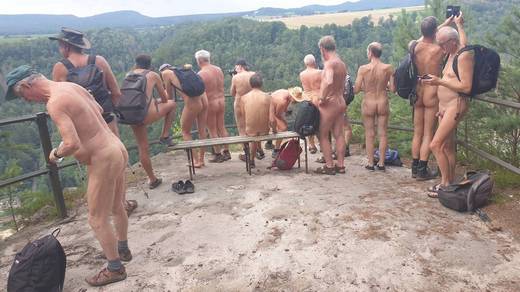 Image 1 of 14: There should be plenty of views today
Soon, we reached the point of deciding for each individual, which level of difficulty of the following ascent was probably the right one. There were three variants to choose from. Together with a few others, I chose the easy ascent via the "Heilige Stiege" to the "Reitsteig", which does not require any climbing experience, a head for heights or surefootedness, but leads comfortably upwards via about 900 steps and a few ladders. 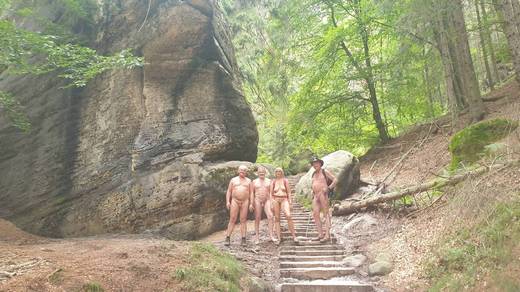 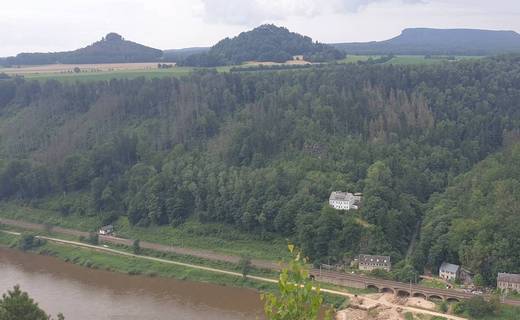 Reunited, we hiked another few hundred metres at an almost constant altitude via Zurückesteig and Reitsteig to the outlook on Frühstücksplatz" to enjoy a well-deserved rest with a view of Kaiserkrone, Zirkelstein, and Bohemian Switzerland. 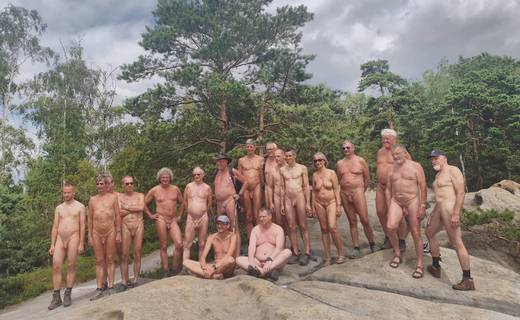 Image 12 of 14: Group photo at Frühstücksplatz

The descent to Schmilka turned out to be difficult, because previously falling water had created additional obstacles. With prudence and mutual help, this passage also succeeded barefoot, while the following steep descent was again characterised by sharp and angular stones, so that the soles of the feet again demanded padding.
We crossed Schmilka with light emergency clothing and stopped at the restaurant at Lichtenhainer Wasserfall [en: Lichtenhain Waterfall] on the way back. Before that, I took a dip in the Kirnitzsch. Some children on a bridge saw me twice, first in light emergency clothing (a very short kilt, suitable for walking, not suitable for sitting), then returing in shorts and shirt. They asked me, what I had done at the Kirnitzsch. I explained to them, that I was sweaty from hiking and wanted to wash sweat and dust from my skin and refresh myself. “That's clever!“ was heard in response from children's mouths.