Media platforms tend to enforce a personal account and a log-in for some videos or photos, so that it might be no longer possible, to show them embedded. For such cases, natury website offers also a text link opening the external platform in a new tab / window.
We found the information below about Olivier Dubois and publicly available video of one of his works by searching the Internet.

“Dubois was born in 1972 in Colmar. After studying foreign languages at the National Institute of Eastern Languages and Civilizations, law and economics, Dubois decided to become a dancer at age 23.
Olivier Dubois has performed for Angelin Preljocaj, Cirque du Soleil, Jan Fabre, Dominique Boivin, Sasha Waltz, and many others. In 2006, he was invited by the French Authors' Society SACD and the ‘Festival d'Avignon’ to create a piece as part of its ‘Les Sujets à vif’ series. His work ‘Pour tout l'or du monde’ (‘For All the Gold in the World’) subsequently received the jury prize from the Professional Critics' Association. At the 2008 ‘Festival d'Avignon’, he created ‘Faune(s)’, based on the famous piece by Nijinski, and won the Prix ‘Jardin d’Europe’, the European prize for emerging choreography. His exhibition ‘L'interprète dévisagé’ (‘The Faceless Interpreter’) at the ‘Centre National de la Danse’ in Paris and Lyon in 2009 was well received.
In 2010, he presented ‘Spectre’, a commission by the Ballets de Monte-Carlo, and created ‘L'homme de l'Atlantique’, a duet based on the music of Frank Sinatra, for the Lyon Dance Biennale. In 2009, he started the trilogy ‘Étude critique pour un trompe-l'œil’ (‘Critical Study for a Trompe L'Oeil’) with the creation of ‘Révolution’ (‘Revolution’) at the ‘Ménagerie de Verre’ in Paris, followed by the solo ‘Rouge’ (‘Red’) in 2011 and concluded by the provocative ‘Tragédie’ (‘Tragedy’), created at the ‘Festival d’Avignon in 2012. As part of ‘Marseille 2013, European Capital of Culture’, Dubois created ‘Élégie’ (‘Elegy’) for the National Ballet of Marseille. The same year, he was named best choreographer at the ‘Danza & Danza Awards’ for ‘Tragédie’ and ‘Élégie’. […]”
– Source: “Olivier Dubois” (en.wikipedia.org), issue: 22020, layout modified by author 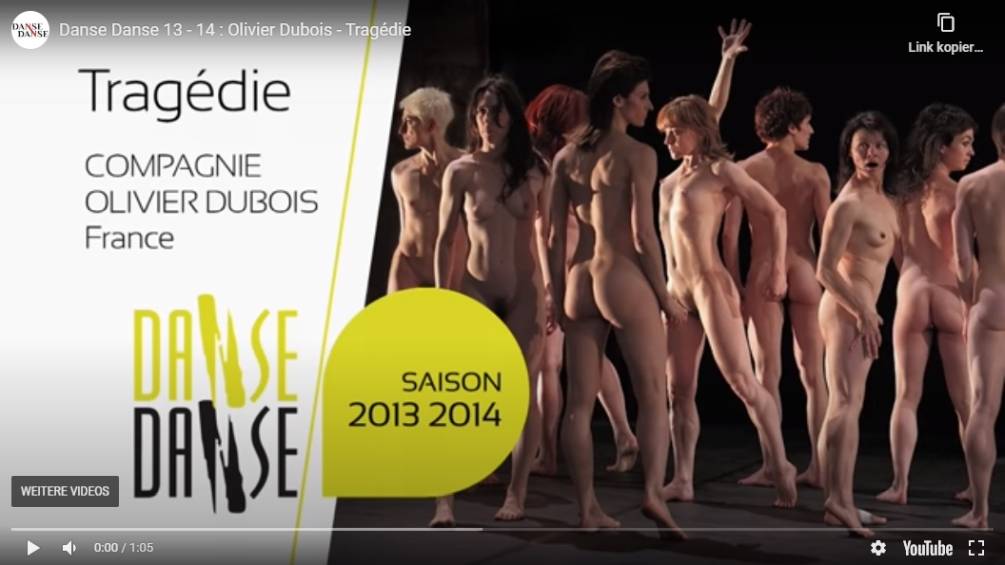 “[…] To the meticulously composed music of François Caffenne, 18 dancers go through a strictly formal choreography and slowly increase to a bacchanalian delirium. Their nudity is both abstract and deeply human. 'TRAGÉDIE’ is pathetic pictorial theatre and minimalist excess, shocking, exhausting, and deeply touching: 'Monstrous is much. But nothing more monstrous than human beings.’ (Sophocles, Antigone)”
– Source: “INTERNATIONALES SOMMERFESTIVAL 2013 – Olivier Dubois: TRAGÉDIE” (kampnagel.de), issue: 2013-2020, translated, layout modified by author

“[…] Dubois had good reasons and he created a piece, which fascinates above all in its structure, its strict patterns.
The choreographer and new director of the ‘Ballet du Nord’ in Roubaix took his inspiration for ‘Tragédie’ from the Choir of Greek Tragedy. The tragedy, which is examined in his play, lies in the fact, he says, that being human does not coincide with humanity. Humanity must be cultivated and cared for. He told London's ‘Evening Standard’, that humanity is exposed in nudity; bodies can be used as a map of civilisation, to read the history of the world. […]”
– Source: “Catwalk der Unverhüllten” (nzz.ch), issue: 2014-2020, translated, layout modified by author

“Olivier Dubois has been shaking up the French contemporary dance scene for more than a decade with some of the most radical choreographic work to date. The director of Ballet du Nord from 2014 to 2017, he was named one of the twenty-five best dancers in the world in 2011 by ‘Dance Europe Magazine and boasts a unique experience working between creation, interpretation, and pedagogy. […]
He is currently creating his new Franco-Egyptian choreographic piece, ‘Itmahrag’, which will be presented in January 2021 at ‘La Filature’, in Mulhouse.[…]”
– Source: “olivier dubois – choreographer” (olivierdubois.org), issue: 2019-2020, layout modified by author