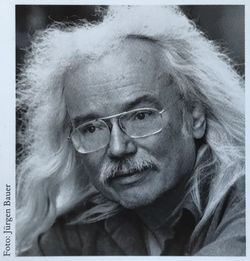 “Hans Peter Duerr (* 6 June 1943 in Mannheim) is a German ethnologist and cultural historian.

Duerr studied ethnology at the universities of Vienna and Heidelberg. He received his doctorate in 1971 at the University of Heidelberg on the theory of consciousness in philosophy. From 1975 to 1980, he was an assistant lecturer and visiting professor for ethnology and cultural history in Zurich, Kassel, and Bern. In 1981, he habilitated at the Gesamthochschule Kassel. From 1992 to 1999, he taught as professor of ethnology and cultural history at the University of Bremen. In 1989/1990, he was a Fellow at the Wissenschaftskolleg zu Berlin and in 1995/1996 at the European University of Florence.
Duerr's regional focus is on indigenous North America, East Indonesia and North Frisia.
The volume ‘Traumzeit. Über die Grenzen zwischen Wildnis und Zivilisation’ [en: ‘Dreamtime. On the borders between wilderness and civilisation’] was published in 1978 and became a much read book at German universities. Duerr describes natural religious traditions. His topics are shamans, witches and astrologers. He deals with the question, what a person of western civilisation can learn from old traditions. In particular, he processes experiences, which he was able to gain when dealing with foreign cultures.
In his five-volume main work ‘Der Mythos vom Zivilisationsprozess’ [en: ‘The Myth of the Process of Civilization’], Duerr is concerned with a refutation of Norbert Elias' theory of civilisation, which he set out in 1939 in his main work ‘On the process of civilisation’”
– Source: de.wikipedia.org/wiki

“The theory of civilisation, which was previously essentially accepted, claims that the people in the Middle Ages, as well as the members of so-called primitive cultures, had little bound or regulated their drives and affects in comparison with us today, that in these societies the renunciation of drives was low and the moderation of emotions insignificant. Nudity, sexuality, etc. were more public and less shameful in these people. However, as the division of labour has increased, social interdependence has become more intense. The ‘affects’ had been tempered and banished to the private sphere. Hans Peter Duerr proves, that this theory of civilisation is wrong. He shows, that the myth of the process of civilisation is identical with the ideology, which was used to justify colonialism, in so far as it claimed that the European nations were interested in civilising undeveloped, uncivilised people. Starting out from the criticism of the dominant theory of civilisation, Hans Peter Duerr, in his sensational first part of the four-volume ‘Myth of the civilisation process’, develops a cultural history of sexual shame and decency, which includes not only Western history since its comprehensible beginnings, but also those peoples, who lived on the periphery of the so-called advanced civilisations. It justifies the assumption that, at least during the last forty thousand years, there have been neither savages nor primitive peoples, nor uncivilised peoples.”
– Source: amazon.de, 2017, translated