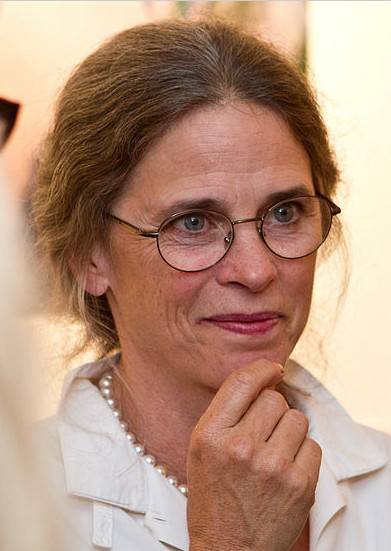 “Sally Mann (* 1 May 1951 in Lexington, Virginia, USA) is an American photographer. She obtained her Bachelor of Arts (Art Diploma) in 1974 and a Master's degree in 1975. Mann lives and works in Lexington.
Sally Mann became known beyond the USA with a series of 65 black and white photos of children, mainly her own, taken with a large format camera: Jessie, Virginia, and Emmett. This book of photographs, published in 1992 under the title ‘Immediate Family’, brought her a great deal of attention, mainly because of the family intimacy. Richard Woodward wrote in the New York Times:
‘With these black and white portraits […] she hit a nerve. With eidetic clarity, she took up the fears and protective tenderness of all parents for their children. A half-naked, androgynous child, smeared with dirt and grass, looks up from a leafy yard. Smooth, pale forms move with proud ease between the thick torsos of older people. The pictures tell of a family past, that is well known to us and which now seemes far away and never to be retrieved.’
The collection also brought Sally Mann criticism and moral accusations of child pornography because of the nude depiction of minors. […] Sally Mann's works are on view in museums in the USA and Europe, including the collections of the Metropolitan Museum of Modern Art in New York and the Whitney Museum of American Art. She has won several awards, including the prize of the Guggenheim Museum in New York; in 2016, her book ‘Hold Still: A Memoir with Photographs’ was awarded an Andrew Carnegie Medal for Excellence in Fiction and Nonfiction in the Nonfiction category.”
– Source: “Sally Mann” (de.wikipedia.org), 2017 – translated 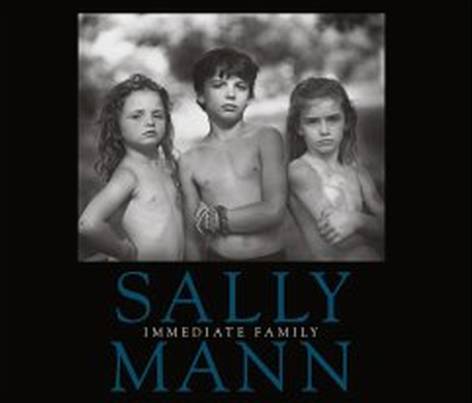 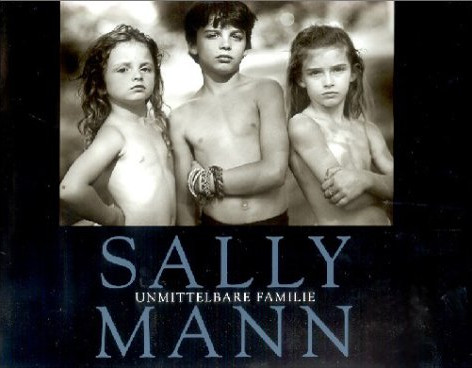 “First published in 1992, ‘Immediate Family’ was praised by critics as one of the great and most influential photo books of our time. Set against the Arcadian backdrop of her summer home in the woods of Virginia, Sally Mann's extraordinary, intimate photographs of her children reveal truths, which embody the individuality of her own family, but ultimately take on a universal quality. With sublime dignity, sharp wit and wild grace, Mann's images explore the eternal struggle between the child's simultaneous dependence and the search for autonomy – to hold on and break free. This is the stuff, which Greek dramas are made of: Impatience, horror, self-discovery, self-doubt, pain, vulnerability, role-playing and a sense of immortality, all of which come together in these amazing photographs. This new edition of ‘Immediate Family’ is printed from Mann's original prints, which were taken with an 8 x 10 inch camera, technically reworked, so that it reappears with the freshness and lushness of the original edition.
This reissue of ‘Immediate Family’ has been printed using new scans and separations from Mann's original prints, which were taken with an 8 x 10-inch view camera, rendering them with a freshness and sumptuousness true to the original edition.”
– Source: “Immediate Family” (aperture.org), 2020, layout modified by the author

“[…] Sally Mann (born in Lexington, Virginia, 1951) is one of America's most renowned photographers. Her work has been exhibited around the world and is preserved by institutions such as the Metropolitan Museum of Art, Museum of Modern Art and Whitney Museum of American Art, all in New York; San Francisco Museum of Modern Art; and Tokyo Metropolitan Museum of Photography. She has received numerous honors, including a doctorate from Corcoran College of Art and Design, Washington, D.C. and membership of the Guggenheim Memorial Foundation.”
– Source: “Immediate Family”, photography by Sally Mann, epilogue by Reynolds Price (aperture.org), 2017, no longer online

“[…] Sally Mann published ‘Immediate Family’ (Aperture), a book of photographs of her children playing on her family farm in Virginia, called ‘disturbing’ by the New York Times and ‘degenerate’ by the Wall Street Journal. The children were often nude since the remote farm was miles away from strangers. The poses of the children, who were innocent in their eyes, nevertheless disturbed many of those who saw them.
She said she and her children, collaborators, were trying to tell a story of growing up. ‘We tell it all without fear and without shame.’ Later she said, ‘The fact is that these are not my children; they are figures on silvery paper slivered out of time … These are not my children with ice in their veins, these are not my children at all; these are children in a photograph.’
At times she sounded defensive, at times uncertain why there was controversy at all. She had not prepared a standard response because she did not expect many people to see these photographs, much less for the pictures to become a cultural lighting rod. […]”
– Source: “THE BLOG 12/31/2015 03:42 pm ET | Updated Dec 31, 2016 | Sally Mann: ‘Immediate Family’” (huffingtonpost.com), 2020, layout modified by the author