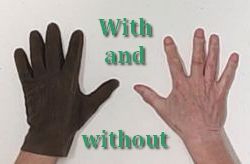 Her motivation: “But in my opinion, people should stand up for themselves and resist society's body ideals. Without their staged and superficial surface, people seem more genuine.” – cit. from “This Photographer’s Striking Photos Will Make You Think About Nudity in a Whole New Way” (cosmopolitan.com). Another regarding article is “With and Without” (lolamag.de). The photo project Photo project “With and without” by Sophia Vogel (Berlin) shows people in everyday situations once with and once without clothes. The photographer offers her photos in a photobook limited to 250 copies, which includes 50 of the pairs of pictures. It can be ordered via her contact form.
– Thanks to Bernard for the hint.

Mag Dr Volkmar J. Ellmauthaler, Vienna, runs a website  medpsych.at in German, partly also in English, in which he also considers naturism or nudity in its role as therapy and prevention in medicine and psychology – besides the importance of the human body in interpersonal relationships,  ethics, and humanism. He also informs about the  naturist camps near Bonn, Germany, wich Michel Zauels offers in summer since 2002. A report  Bericht zu bald 2 Jahrzehnten NC by Birgit und Volkmar Ellmauthaler describes it as a pleasant, therapeutic experience.

The pages still hold many surprises on the subject of naturism, often hidden behind a link, e.g. on the page  WANDERN a diploma thesis Naturismus in Wien and a dissertation Natürlich, nackt, gesund, or the Loblied of German health insurance BARMER  Ein Hoch auf die Nacktheit. Also, you may read or download  Psychosoziologie der Nacktheit by Volkmar J. Ellmauthaler and a list of available documents  Verzeichnis von Arbeiten zum Thema Naturismus etc. 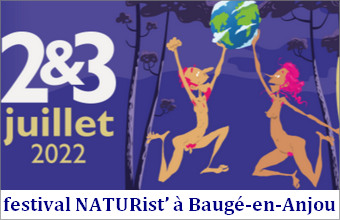 For the second time, Baugé-en-Anjou, Maine et Loire, is hosting the naturist festival under the Esdperanto motto ‘por nova mondo" [en: for a new world)] “Ecologists, naturists, and esperantists decide to create a festival together, ‘so that nature and our HumaNUty live on’, without shame or taboos. Objective: to act for the advent of an eco-responsible society, of respect for the living, of social progress, of freedom and emancipation.”, states the website  festinatur.fr, also supported by  helloasso.com.

The nature and environmental awareness already contained in naturism is expanded by the organisers to include socio-political goals such as social justice and emancipation, the promotion of universal language Esperanto, and the goal of peace in the world. A wide arc, which should be closed by a varied program at the festival, following the motto: “A FESTIVAL FOR BIODIVERSITY, FOR NATURE AND MY TRUE NATURE TO LIVE Free and emancipated, LIVE THIS FESTIVAL AS NUDE AS YOU DARE!!’”

“This festival is public and aims to bring together – in a festive and playful, cultural and sporting setting – natural and legal persons whose ambition is to mobilise for a new world (‘por nova mondo’ in Esperanto) that is truly respectful of the planet and all of its inhabitants, in a completely transformed relationship with living beings; for the advent of a new HumaNUty, of which future generations can be proud.”

“The FestiNATUR' association recognises itself in the youth and popular education movements and aims to bring together, around social ecology, naturist movements and Esperantists, those who have become aware of the climate emergency and the 6th mass extinction of living organisms, and who have decided to take action to safeguard biodiversity, so that nature and our nature may live on.”

“Our nudity becoming the symbol and expression of a new paradigm, for this new world. It symbolises our values: FREEDOM, EQUALITY, FRATERNITY, and LAITY; the humanism of the Enlightenment; respect for oneself, others and the environment; sharing and solidarity, simplicity and moderation in all things; emancipation, feminism; pacifism, and non-violence.”

“Festival-goers will therefore be invited to experience simple nudity throughout the event and to communicate in Esperanto, the festival's 2nd official language, along with French.”

“The sports events will be practised in ‘gym clothes’, i.e. in the nude, in order to value our new HumaNUty, harmony with nature, and our true nature.”

“ALSO ON PROGRAMME: an associative village, concerts, street arts, workshops, exhibitions, conferences, Esperanto, yoga and shiatsu, a pedestrian race for FREEDOMS, a mixed volleyball tournament for EQUALITY, a petanque competition for FRATERNITY, a games area FOR LITTLE AND LARGE CHILDREN, and lots of nice surprises.”

Programme of the festival in French (PDF)

“ Baugé-en-Anjou is a commune in the Maine-et-Loire department in western France.” (en.wikipedia.org), 2022

A trip to the Loire is always worthwhile, and this festival highlight makes it even more worthwhile. The festival has to finance itself through visitor contributions. Tickets:
BILLETTERIE - ACCÈS au festival NATURist' por nova mondo.

“On 16 February 2022, l’Académie des beaux-arts [en: the (French) Academy of Fine Arts] calls for vigilance against the censorship of artworks on social networks. An arbitrary policy, which mainly affects nudity, explicit or suggested, and which is detrimental to the heritage of humanity.
From ‘L’Origine du monde’ [en: ‘The Origin of the World’] by Gustave Courbet to ‘La Liberté guidant le peuple’ [en: ‘Liberty Guiding the People’] by Eugène Delacroix, from ‘Descente de Croix’ [en: ‘Descent from the Cross’] by Peter Paul Rubens to photographs by Lucien Clergue and, 4000 years ago, the ‘Venus of Willendorf’, there are countless examples of censorship on social networks, which considerably hinder the promotion of art on these essential media every day, according to the Academy of Fine Arts. Main social networking platforms have indeed introduced in their terms of use that ‘their broadcasting policy does not allow nudity or suggested nudity’, thus making, through their algorithms, no difference between works of art and selfies and other personal shots of nudity carried for all to see.
The members of the Academy of Fine Arts, meeting in a weekly plenary session on Wednesday, 16 February 2022, consider that broadcasting platforms cannot arrogate to themselves the right to censor the broadcasting of a work of art on the sole grounds that the representation of the latter does not fully meet the criteria they have established. This grotesque situation calls for a legitimate reaction from the Académie des Beaux-Arts, which calls for questions to be asked about the freedom to disseminate information and the means to be implemented to protect it, the Academie estimates.
For many years, this censorship has been practised without moderation, having prompted the Vienna Museum, for example, to register on a network forbidden to under-10s (Onlyfans), in order to be able to publish without hindrance.
Download the press release of the Academy of Arts”
– Source: “LA CENSURE INQUIÈTE LES ARTISTES – Censure des œuvre d'art sur les réseaux sociaux” (naturisme-magazine.com), 2022, translated, layout modified by the editor

Source: FAZ+ article “FRANKFURTER ORIGINAL: Der Mythos vom Nackten Jörg” (faz.net), author MATTHIAS TRAUTSCH, photo: Deep Link to German daily newspaper FAZ (no copy)
“Those speaking of him usually do so with a smile. Yet hardly anyone knows who the city-famous nude man was and what became of him. About an urban legend.
[…]” 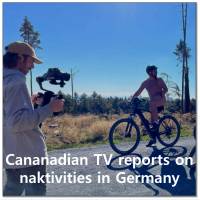 First time nude on a bike However, it was now clear, that I would like to be in nature in the nude much more often, so a short time later I decided, that I would give a nude mountain bik... 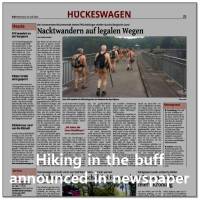 Hiking in the buff is in Germany meanwhile well known and broadly socially accepted: Articles in press media not only report afterwards, they also announce such naktivities in advance to their reader… 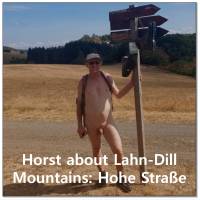 In late summer on the first weekend of September, we set out on a 14 km long and varied hike in Lahn-Dill mountain region. Just in time for the start of the hike, the closed cloud cover opened up t...