In the food industry, but not only there, the slogan “Buy unpacked” is trendy. The discounter Netto stretches its marketing with pictures of unpacked, i.e. clothes-free ladies. The invitation, to go to Netto for shopping unpacked, i.e. without clothes, is a little late in the year, but courageous customers should not be deterred by outside temperatures going down – the shops are heated, and, maybe, there's even a hot coffee or mulled wine to warm you up? 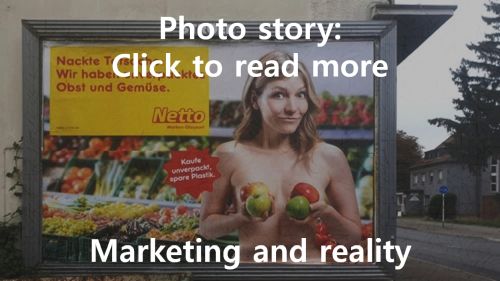 Meanwhile, about 50% [figure updated on 30 December 2018] of all visitors use a smartphone

or tablet to access the natury website. We have made some changes, so that you get a useful presentation on a smartphone as on a wide screen. The menu, in particular, was difficult to access on the smartphone, because it is shown near to the bottom on a slim display. That's why there's now a new menu, that can be opened using the menu button at the top of every page. This works the same on all displays.

Of course, we are also working on the content and layout to meet your expectations. Thus, we partly streamline and modernise the content. A new homepage also serves as a landing page for visitors, who visit the natury website for the first time, and offers them an introduction to the subject.

The roof damages, Friederike caused on 18 January, were repaired after a few weeks thanks to countless overtime hours by roofers, but many of the trees uprooted by the hurricane – exactly on the 11th anniversary of storm 'Kyrill' in 2007, by the way – still lie untidy in the forests and block numerous hiking trails, e.g. the paths A10 and A14 near 'Belecke', as shown in the photo. According to corresponding information in German press, it may take until the end of 2018 before all storm damage is cleared.

Kunsthal Rotterdam [en: Art Hall Rotterdam] in the Netherlands offers a naked tour concerning the topic “Hyperrealism Sculpture” on Saturday, 23 June. You may order tickets in advance via Internet, Link: Naked Tour Hyperrealism (It could be a good idea to hurry up, because a similar tour on 2 June is already sold out!). The website provides also further details as to the the event.

The Roman style spa in Zülpich is nowadays a museum about the culture of bathing, which focusses on the developement of that since the time of the Roman empire.

In a special exhibition, which will be shown until 15 July 2018, the theme is “Nackte Tatsachen – Baden in Ost und West” [en: “Nude facts – Bathing in east and west”]. Here, different naturist traditions in the Federal Republic of Germany (FRG) and the German Democratic Rebuplic (GDR) are made clear.

– Thank you Günther for pointing that out!

Andrea and Roberto cycled on 17 July 2017 in the afternoon of a very hot summer day at the lake – of course, according to the summer temperatures in the buff. In order to avoid blood-thursty insects again on the way back through the fields on the return trip, they chose a barely frequented way west of the railway track in the city of Kamenz. There, however, a detour due to road works forced them to to cross the railway track twice and to ride a bit of the way through the Schiller Promenade, instead of the planned route.

Here, the nude bikers encountered a few people, and they also had to pass a playground, whereupon, according to a father's testimony, his two children came running “completely upset”. The uncle persued the nude bikers on a BMX bike, steered his vehicle with one hand – with the other, he held a video camera – between the two cyclists and tried to stop them with this driving manoeuvre and to record a video of evidence.

The father filed – with the brother-in-law as witness and the video as evidence – charges for “Causing public nuisance” (Section 183a, German Criminal Code). Since no corresponding elements of an offence existed, the public prosecutor closed the proceedings, of course. But the regulatory authority issued (regulatory) fines of 30 Euros each, against which the couple filed objections. So the case was heard at the district court. “At the trial, the District Court Judge said: ‘I do not want to make a big fuss of that. Everyone has the own personal freedom – but there are limits.’ The case is closed. In the future, the couple should, however, keep a little more covered …” (translated quote from tag24.de).

Comment: Obviously, the detailed rationale of the naturist couple in their statement convinced the judge. He stopped the proceedings and gave them the friendly advice to keep more covered in the future, so that due to encounters with similarly pitiable people, these do not act again in an illicit behaviour (dangerous behaviour within the traffic, unnecessarily alerting of the police, …).

PS: The statement of sz-online.de, which inputes the judge to have said: “To show yourself naked in public is a public nuisance, because there are also people – in this case children – who are bothered by it.”, is obviously a misunderstanding by the reporter. Of course, the judge is a lawyer and would never give such a false statement.

Many thanks to Roberto for the info and the documentation!

17 Irish naturists travelled to the – according to a statement of the operating company – biggest spa of the world in Erding, Bavaria. A “welcoming committee” of the “Isar Nacktsport-Aktive” [en: “Active Isar Nude Sportpersons”] shook hands with them. Rudi reported about the encounter “Irisch-Bayrisches Naturistentreffen in der Therme Erding” (isar-nacktsport.de) on their website.

Addendum on 16 March 2018
For the spa guests from Ireland, the visit to Erding was so impressive, that a participating couple published a post on their blog entitled “Irish saunas – 100 years behind”, in which they enthusiastically report on their experiences in Erding.

Some Saxon friends of hiking in the buff were nude in the Spreewald Museum on 10 February to visit the exhibition “Klaus Ender – Akt und Landschaft” [en: “Klaus Ender – Nude and Landscape”], in which numerous photos of the photographer of nudes were to be seen. Their website provides a detailed report “KLAUS ENDER – AKT UND LANDSCHAFT” (nacktwanderfreunde.de) of the museum visit with some photos.

The most important parts of http://www.natury.de are now made easier to understand for those, who are not fluent in German. We hope, that this will encourage our friends outside Germany to participate in our nudevents. Everyone having something to report, that might be interesting for other readers (hikes in the buff, nude bathing, or anything else important from the naturist perspective) may inform us by sending photos and text to (Dutch) or (German, English, or French). Of course, we also invite our German readers to send us their reports.

It is, of course, not our intention to translate all articles, since many of them are relevant for only one country and will therefore not be translated into the languages of other countries. Yet there is enough input to be translated, so it will take some time to have everything important available in the relevant languages, since all those contributing to this site do this as volunteers besides their other activities.

Would you like to contribute to our comprehensive translation work from German into Dutch? Then please write an e-mail to .

If you like to contribute to our translation work from German to English or French, write an e-mail to please.

Between the towns of Beckum and Lippetal, there is enough space, to successfully complete a 25 km nude bike tour through the south 'Münsterland', which was a sheer pleasure at 31°C air temperature in late summer! An oncoming driver turned around to point out a nursery in my cycling direction – but that was not necessary, because I wanted to turn aside anyway before reaching the village, as it complies with our habits.

Shortly, before I reached my home town, I started to put on clothes again – after all, I wanted to go shopping at the supermarket, and people seem to prefer to smell sweaty T-shirt compared sweat-free, body lotion scented human bodies. Strange, isn't it?

Spontaneously due to the summer weather, Mic had invited some cyclists, who since long time practise nude biking in Münsterland. At up to 31°C, a cloudless sky, and impeccable long-distance view, the varied ride was pure enjoyment!

Looking at the north, we noticed the only visible, very significant water vapor concentration in the lower atmosphere: Steam from the cooling tower of KKE [en: NPS] Lingen, rising in a slender column, agglomerating at about 2000 m to a cloud, can be seen from a distance of 60 km sharp-contoured!

F · Shopping in the nude at the baker’s …

… most of us do not regard as obvious – being in the buff, when you buy your buns, especially if all other customers still wear winter coats. 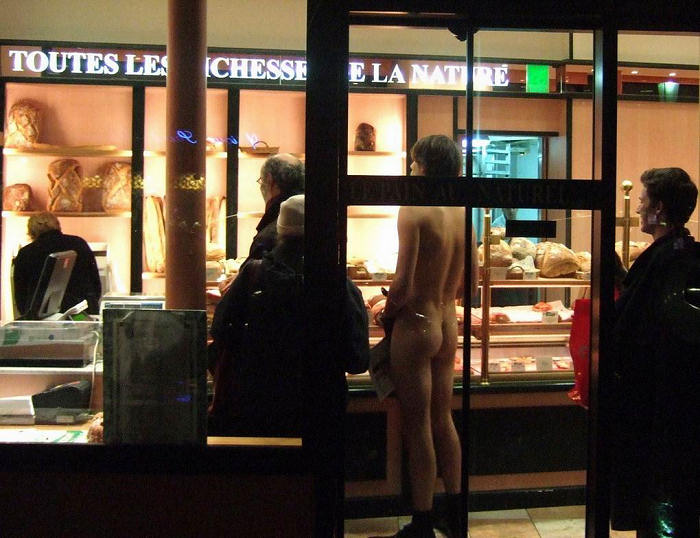 Shopping in the nude

However, this young man in France implements this practice – since the baker’s slogan for his products is “Toutes les Richesses de la nature” [en: “All the treasures of nature”]. A motto, which we naturists naturally follow gladly!