"On the banks of the river Seine, similar conditions did exist. Indeed, nude men are tolerated in the 16th century, but the pious ones are increasingly concerned by the sight of unclothed women in the middle of the city. Pierre de Lancre reports of king Charles IX, the latter had one day indulged himself in the Tuileries, »and saw a woman (of perfect beauty), who swam completely nude from the Louvre to the Faubourg Saint-Germain; as he, like his whole court, spectated at her, she suddenly submerged and disappeared from their sighting. On the other side, she swept towards the bank, where she tore at her hair. Then she went away, taking her pride and all eyes and hearts with her«. The king, as Pierre de Lancre says, had been so shocked, that »no word of praise was heard from his mouth«." 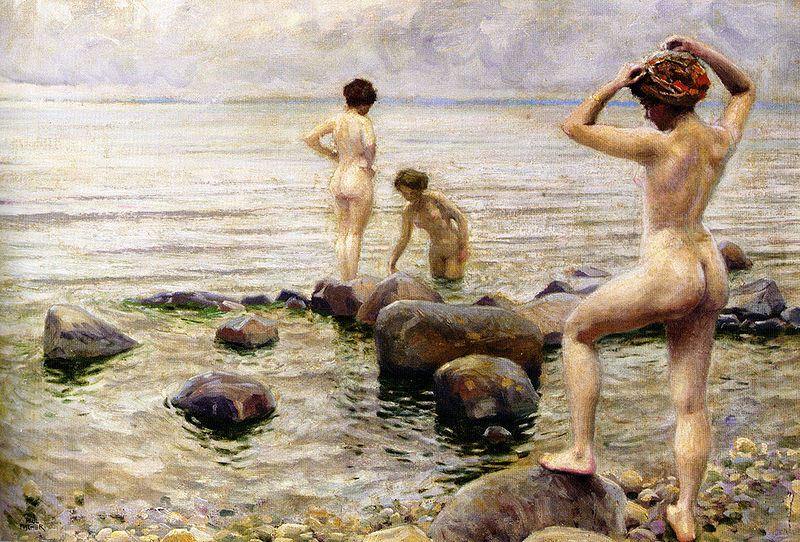 The author himself is most deeply moved, however, who can not condemn »such an immoral deed, so indecent for the shamefacedness of the women« severely enough at all. The scandalising of this incident is not based upon a damnable act that, could lead to promiscuity, but on the sight of nudity as such, that draws the attention of the involuntary witnesses. »She gets into the water and lights a fire with the audience. She is bathing and refreshing, but they are getting aroused«, Pierre de Lancre is indignant over it, and that written on several pages, thus betraying to be in a deuce of a stir.

The wild nude bathing on the banks of the river Seine is forbidden to women from the beginning of the 17th century. The moral view is now directed to the men, who continue to enjoy the paradisiacal delights of the natural state. The salons of the precious ones, on whose prudence the Marquis de Coulanges japed in one of his popular songs: »Totally nude men«, the ladies would have seen on the banks of the Seine, and would almost have fainted; now they would rather not leave the house at all. Coulanges puts words into their mouths wishing, that the King may strictly forbid bathing without clothes.

Well, the precious ones easily swooned and they had rather firm ideas of the ugly and the sublime. But not all ladies were like them. La Bruyère, too, knows of the section of the Seine, where the »fellows« sought refreshment on the canicular days. »They are seen from near by, as they plunge into the water, and get out again … If this time of year has not yet come, the women of the city do not yet stroll there around; and when it is all over, they won't come to that place any longer …

Whether it provokes interest or indignation – nude bathing is no longer innocent. Clerics such as Bourdaloue take offense and also the authorities do: in 1724, Joly de Fleury criticizes the men who »show themselves in the face of many people, especially the opposite sex« – though they did not complain about that! He does not hesitate, to suspect the nude bathers of all sorts of vices, among which he also calls "disgracefulness", which they were doing with other men.

The inhabitants of Paris have the decency to bathe increasingly outside the city walls. The Count of Soissons used to do this in front of the Arsenal in the Seine, or in the moats of the fortifications of the times of Charles V. In Paris, one knew that it would be better not to disturb him then: together with the nobility of his entourage, he organized water battles against citizens who wanted to swim there at the same time.

The personal physicians of Louis XIII and Louis XIV report, that the Highnesses let themselves escorted to the island of Conflans, to the island of Gauloise, to Saint-Germain, or to Melun, to take their bath.

The king and the court had a different sense of shame than the citizens of Paris. Probably, Henry IV. also went into the water in his birthday suit as did his subjects. When he accompanied his son in 1609 on his first bathing trip, the »good king« pees into the Seine. Little Louis, not yet eight years old at this times, is urged to imitate his father, but he refuses stubbornly, because »he is afraid to drink of it«."

*) A printed book with a translation to English does not seem to exist. Therefore, the translation of the citation given here is based on the cit. in German language.