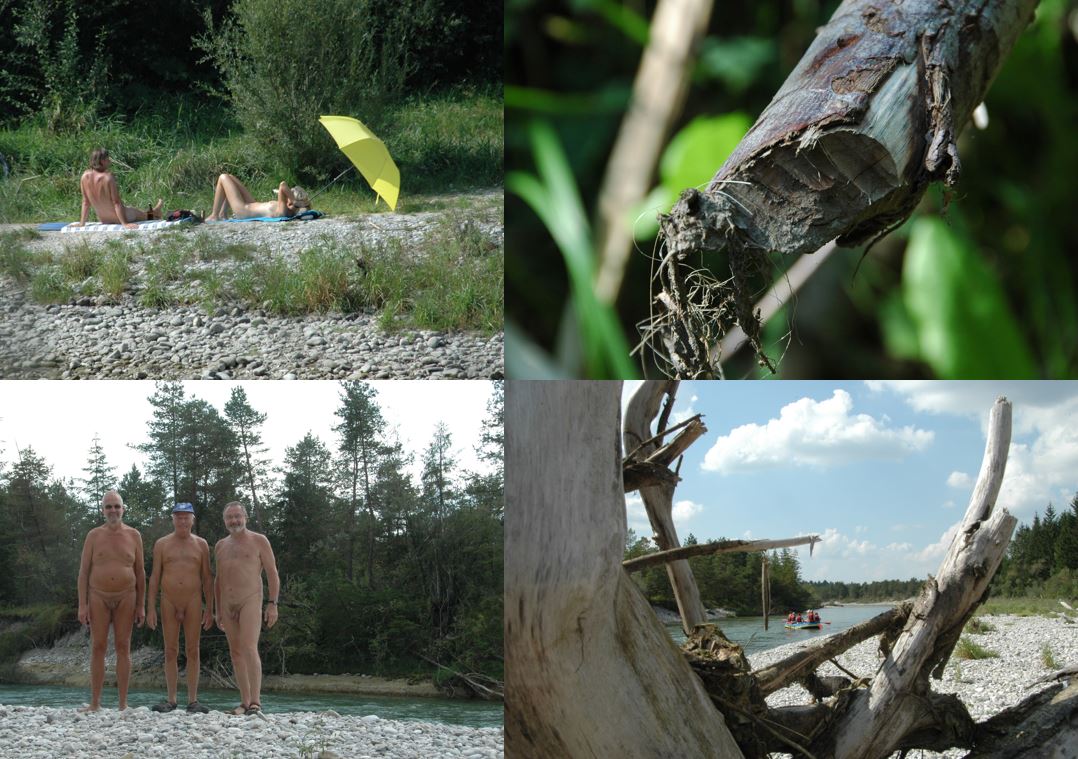 Banks and meadows at Isar River

Two prussians*) (from Thuringia and North Rhine-Westphalia) informed themselves a few days before “Nude Alex” offered a hiking tour to some Gumpen, about naturists at the Isar River. They met with naturists living there and practiced nude hiking and bathing in the Isar at 29°C air temperature and in refreshing water at 16°C.

Nature was able to impress with a variety of plant life, crystal clear river water, fish, and traces of work of beavers, whose buildings can be found right on the water's edge. Now, also two prussians know, that Gumpen are water-filled natural pools in the rocks, in which you can have a pleasant bath. 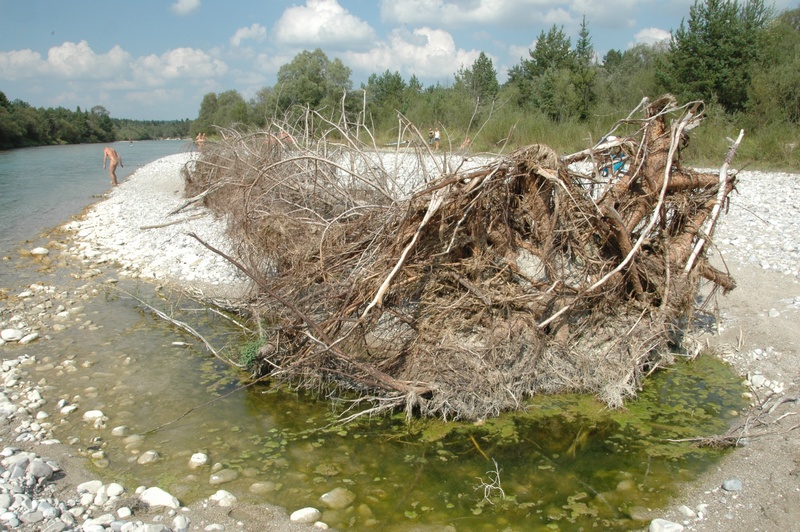 Further upwards the Isar, the naturists explored the impressive natural river landscape halfway through the water, half on pebbles, in sunshine, blue skies, at 26°C air temperature, and there at the upper reaches of the Isar refreshing 10°C water temperature. Walking sticks proved to be useful in balancing on the differently sized pebbles of the water, but partly less useful because of locally strong currents.

Fortunately, passages with strong currents were only short and not too frequent. And again and again, enough deep places with moderate flow offered the opportunity to a refreshing bath. We got a good idea of how river landscapes were before human interventions: meandering in a wide pebble bed, with relatively shallow water and constant changes in the river's course.

Afterwards, the return through shaded forests took place on a first pre-alpine rise, which a number of cyclists took sportily, back to the starting point.

There, the naturists could once again bathe in the Isar and refresh themselves. Only comment from sunbathing textile weares near a parking lot for hikers on the edge of a village: “Is not that too cold? We were only with a foot in there, and it was too cold for us.” Well, after a hike at such a high air temperature, this is really a pleasant cool down.

We wished each other a nice day and went over the bridge. Sun and a friendly wind dried us, so that we did not even need a towel on arrival at the car. 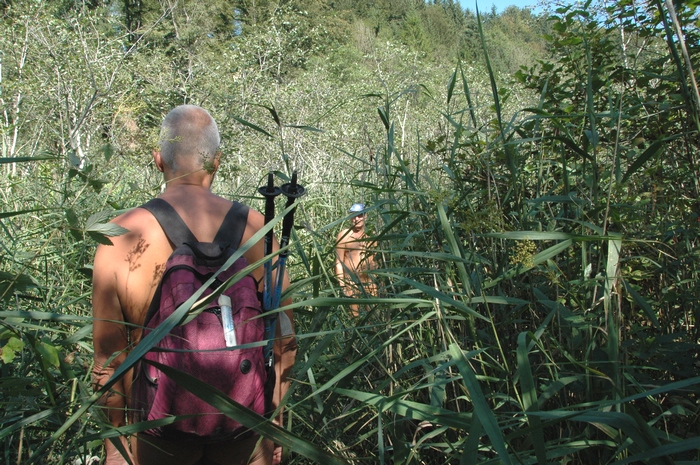 The prussian naturists in Bavaria explored at 29°C air temperature the meadows and gentle slopes at the Loisach near Garmisch-Partenkirchen with the impressive panorama around the mountains Zugspitze and Karwendel. We shortened time for bathing in the Loisach slightly due to its water temperature of 10°C.

Particularly exciting was a part of the hike along the river – it felt almost as overgrown as Amazon jungle. Leisure teams on inflatable boats, in canoes, or on horseback in the river greeted as friendly as well as a farmer from his tractor doing hay harvest. 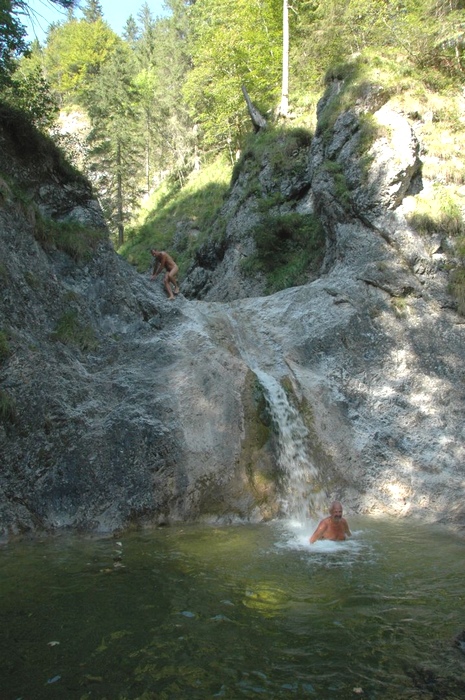 20 naturists gathered to hike with Alex on his tour to some Gumpen. Up to 23°C air temperature and sunshine were the pleasant conditions, so that a bath in one of the numerous Gumpen with 9°C to 10°C water temperature always offeres a welcome refreshment. One Gumpe even had a natural shower of its own – water falling in it offered a strong massaging effect.

After arriving at Sylvensteinsee Lake, the participants entered the over 500-year-old restaurant Zum Altwirt [en: At The Old Barkeeper] in Lenggries and then switched to a neighbouring ice cream parlour, in order to end an eventful day calmfully.

At the end of beautiful Upper Bavarian Naturist Days, the naturists experienced the Isar between Flaucher, a since 120 years existing nature reserve in the middle of Munich, and Grünwald at 23°C and sunshine.

The meadows at the Isar have been restored with great success in recent years. Plants, animals, and people feel equally well. A heron waited not far from the Flaucher on a stone in the crystal-clear water for food swimming by. Information panels describe the measures for renaturation, signs inform about the naturally behaviour in nature: no broken pieces of glass and no garbage left behind. 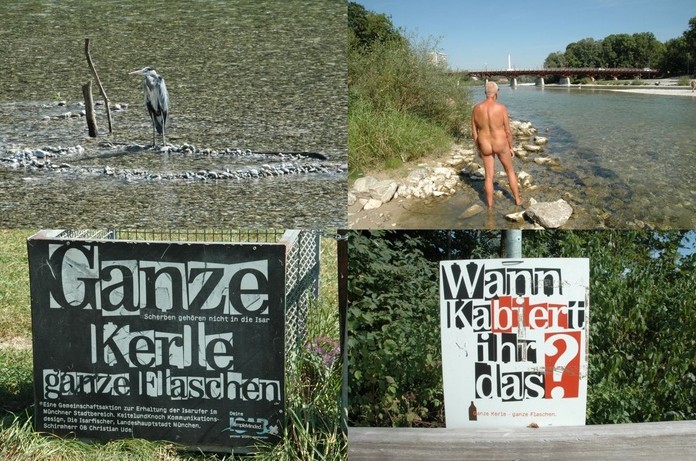 Between two nude hikes of about 6 und 11 km, we have had a typical Bavairian second breakfast called Brotzeit in a small beer garden directly nearby the Flaucher. We didn't miss a bath in the 16°C warm water of the Isar!

– Report and photos: Horst and Rainer

*) It is a running gag in Germany, that some people in Bavaria distinguish Germans only into Bavarians (i.e. themselves) and Prussians (i.e. all others in Germany). Some – untranslatable – jokes make fun of that.