9 naturists from France and Germany met at Col de Cabre in Vallée de Drôme to hike in the nude on the western edge of the French Alps. At a air temperature of 7°C in the beginning and a violently blowing wind, it cost us quite an effort to start the hiking anyway. The sky, however, was almost cloudless, so that in individual wind-protected passages it was actually so pleasant that gradually everyone could undress and feel the sensation of feeling nothing but air and sun on the skin. After a little more than 5 hours, 16 km of track and more than 800 m cumulated difference in altitude in a range between 1,040 and 1,310 m above sea level were made. To vitalise themselves again, the participants enjoyed the French cuisine in the local gastronomy. 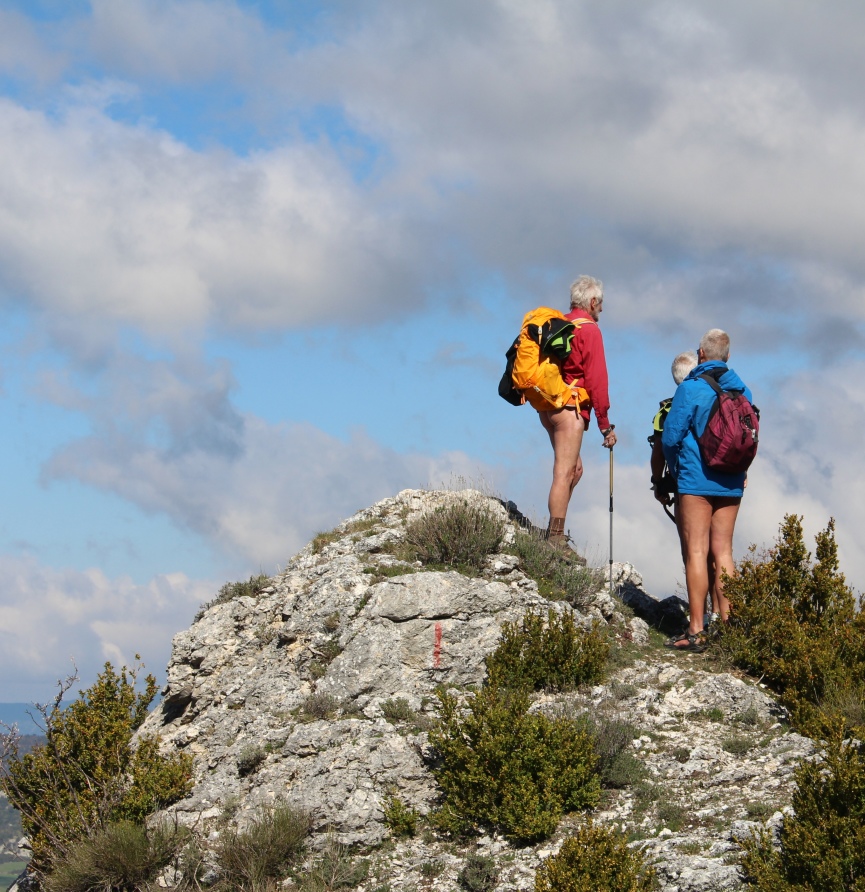 – Report and photo: Rainer and Horst

Also on Wednesday, 19 April, initially 7°C like on the previous day and also a fierce wind were a challenge for 10 naturists from France and Germany, who were accompanied by 2 dogs this time. Pas de La Pousterle in Vallée de la Drôme was the meeting place for today's hike in the buff on the western edge of the Alps. From the sky, the already rising sun shone almost unhindered. The first climb was naturally sheltered against wind and exhausting: with a rise by 510 m difference in altitude on a 3 km stretch, i.e. an average gradient of 17%, the hike within one hour actually warmed us so much, that we could gradually adopt the intended condition of a hike in the buff. 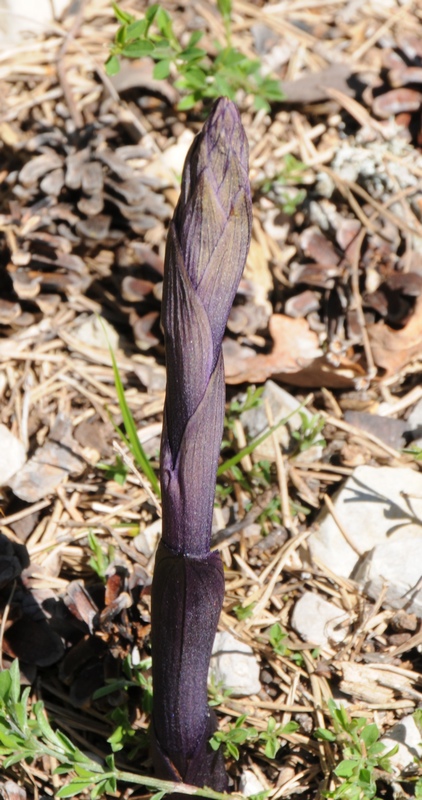 It remained unclear to us, what a plant in the protection of the dark, violett-colored sheets sprouts up here. For the determination of the species, one will probably have to return in a few weeks, when the sapling has unfolded. A wind-protected break place in the sun at 16°C air temperature provided a magnificent view of the panorama of the surrounding mountains. In the course of the hike, the majestic view of the snow-capped peaks of the French Alps was opened, too. After 6 hours, 10 km of hiking trails and cumulative 700 m difference in altitude at altitudes between 730 and 1,300 m above sea level, a beautiful nude hiking day ended relaxed with the enjoyment of food and drinks in an inn. 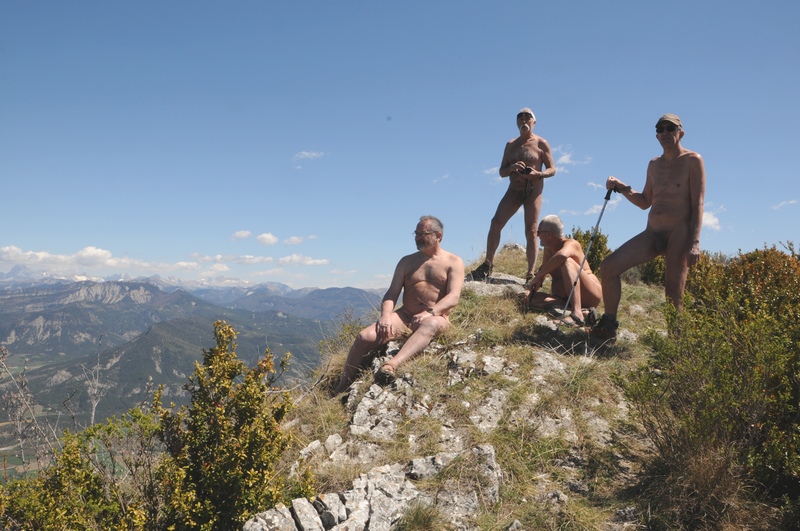 – Report and photos: Rainer and Horst

Addendum [25 May 2017]: The unknown plant is a violet bird's-nest orchid or violet limodore (Limodorum abortivum), a species of orchid. They are rhizome geophytes with numerous long, fleshy roots. The rhizome itself is short, thick and also fleshy. The strong, finely striped stem grows to a height of 20 to 60 cm and carries sheathed scale leaves. The inflorescence is loose and 5 to 20 flowers. Translated German source: Violetter Dingel (deutschlands-natur.de)

On Thursday, three men and one woman took part in a nude hike in the heart of the department of Drôme. They started directly from their domicile, the naturist centre Val Drôme Soleil, and hiked the mountain passages of Col de Sauzet and Col de Pourcheton. Once again, the sun had to warm the quartet, because after a frosty night, the air temperature was only 7°C at the beginning of the hike. Fortunately, the wind did not blow so violently any more and continued to abate, so that we could soon stow our clothes away into the backpacks. 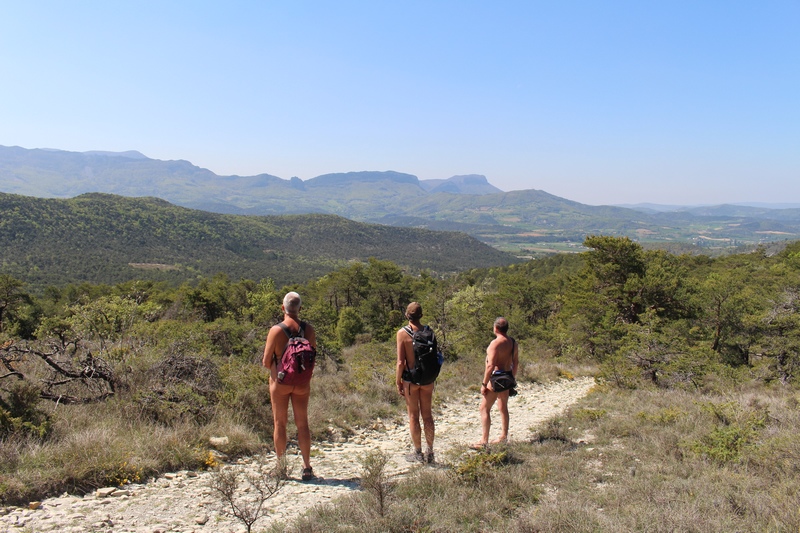 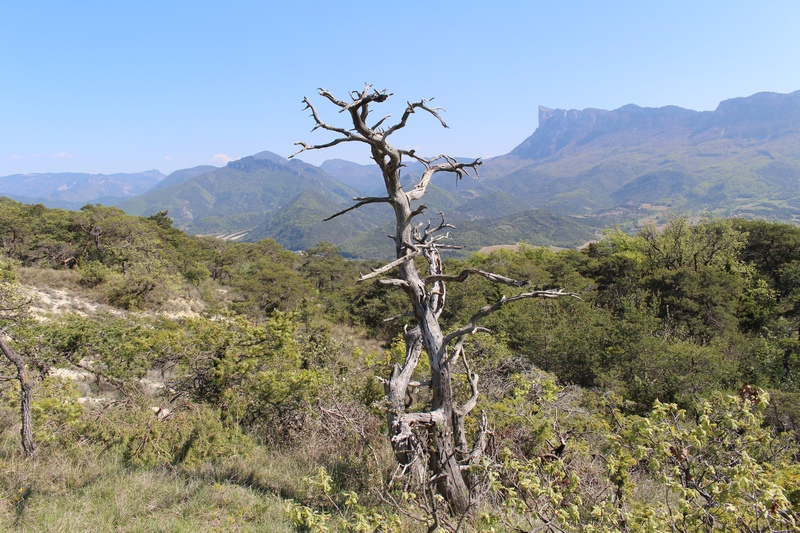 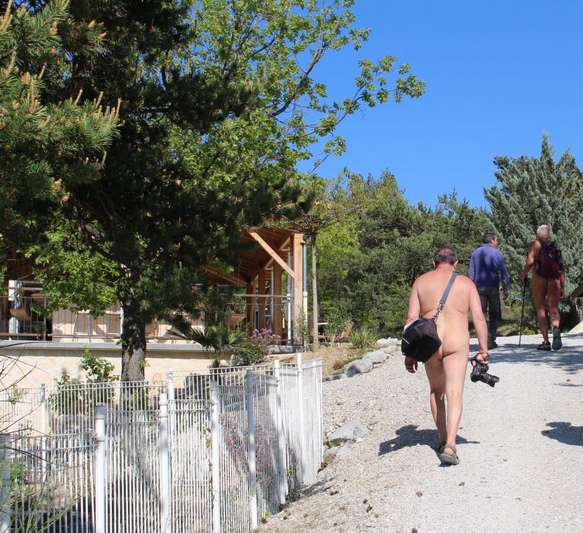 Arrival at the naturist campsite

In a once again impressive mountain panorama, the path led us alternately through small groves and open country, this time with cumulated 550 m difference in altitude. It was not quite as demanding as on the previous day, because the slopes were more moderate. After a varied excursion, the nude hikers returned to their accomodation 'Val Drôme Soleil' at 19°C, where they let the day end on the terrace in conversation with the operator of the campsite having cool drinks.

– Report and photo: Rainer and Clarisse

On Friday the 21st of April, Queen Elizabeth experienced her 91st birthday. Because it is too cold for her in April, she is always celebrating it only in June. Not so the seven naturists from France and Germany, who are currently on holiday in the Drôme valley, can not be frightened by the temperature of 3°C at 9 o'clock. The sun managed to warm up the air by additional 6 °C until 10 o'clock. So, 5 gentlemen and 2 ladies hiked along with a dog. 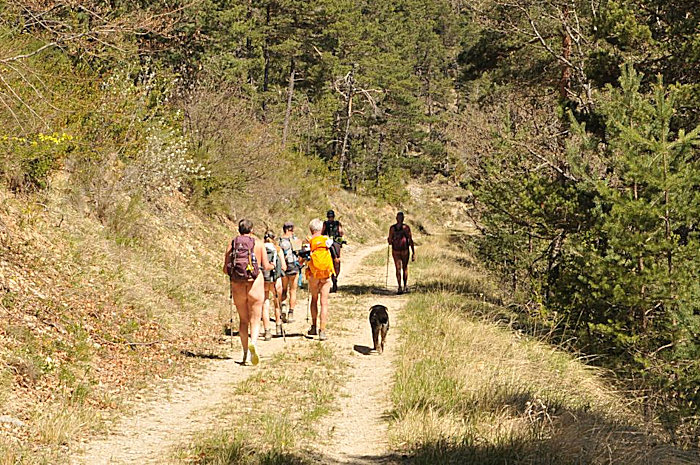 It did not take long until the temperature reached 20°C. 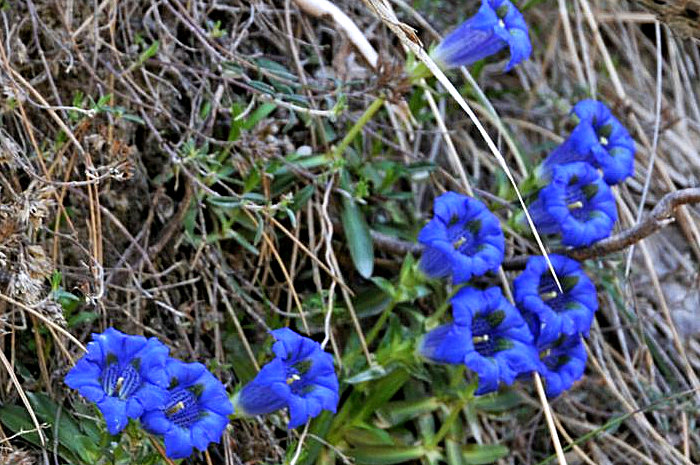 On the edge of the path, it blossomed in a variety of ways. 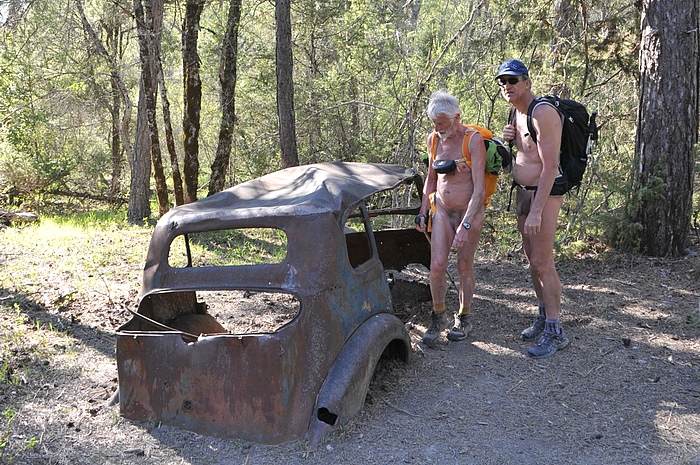 In the sheet, bullet holes are still visible. Resistance fighters stole the car from Germans and left in the swamp. 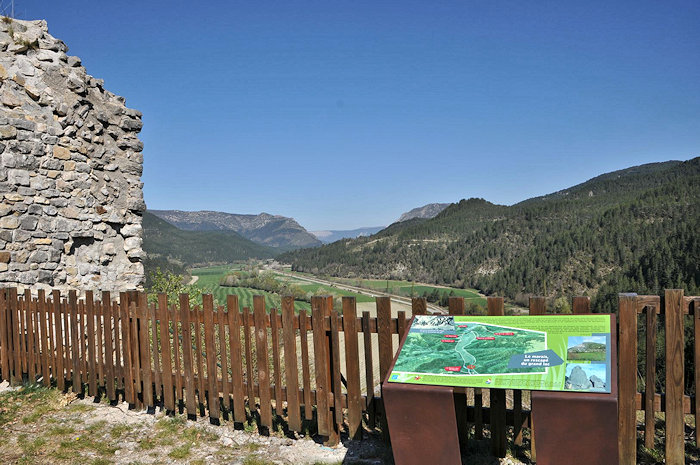 An overview of the swamp area 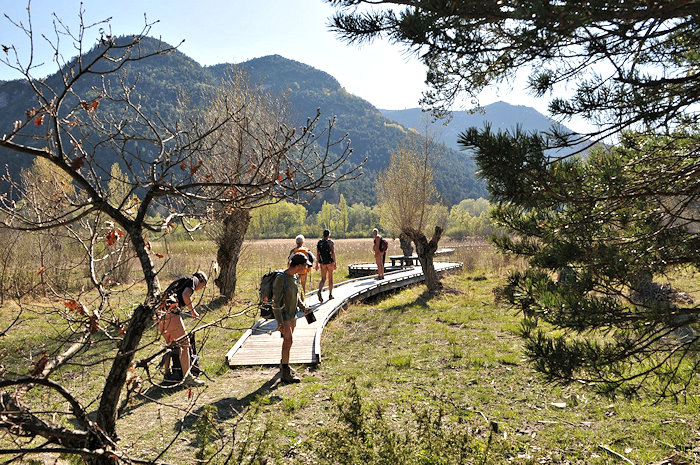 Here, too, there was too little rain in the winter: the swamp is largely dry. 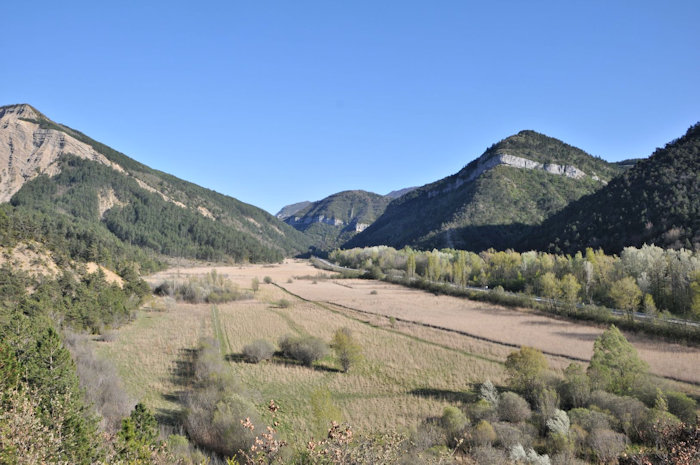 After 17 km over cumulated 500 m difference in altitude of climb and descent, the hike in the buff ended. In the evening, we enjoyed again good French cuisine – and the first translation plans for the natury website.

– Report and photo: Rainer and Horst

At the close of the hiking days, in the Vallée de la Drôme on Saturday, 22 April, a group of naturists met once again in Parc naturel régional de Vercors for a last tour on the high plateau of Die. A trail led us up to the Col de Bergu and then to the Col de la Tou. 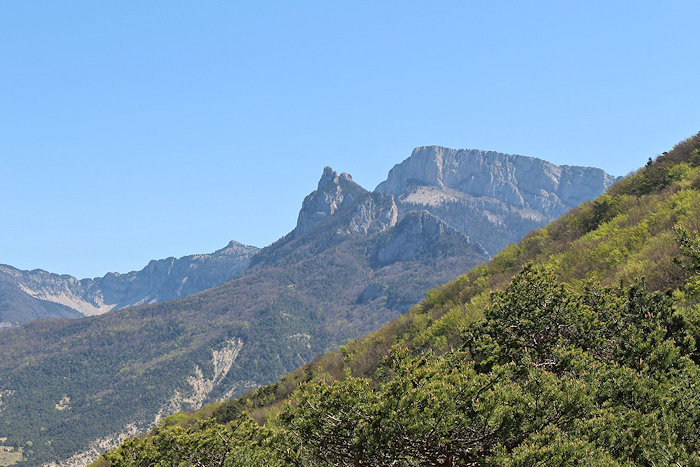 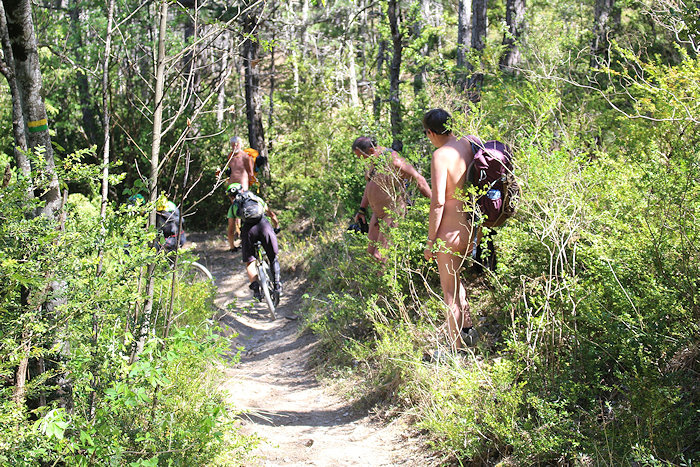 Encounter in the forest

We met a group of seven cyclists and a single hiker, all happy about the encounter. The hiker told us, that she did not want to undress herself, because the backpack straps would cause light streaks on skin at the shoulders – the trademark of nude hikers. We immediately agreed: This is an excellent motivation for hikes “without everything”, i.e. also without backpack (as far as that is possible).

– Report and photo: Rainer and Pascal