Reports by category: Biking in Thuringia

During TNT 2020, on Wed 19 August, there was an option to enjoy the day either on foot around a dam without carrying anything with you or to cycle and partly push the bike:

► Wed 19 Aug: Choices on rainless Wednesday: Hike or bike and push the bicycle 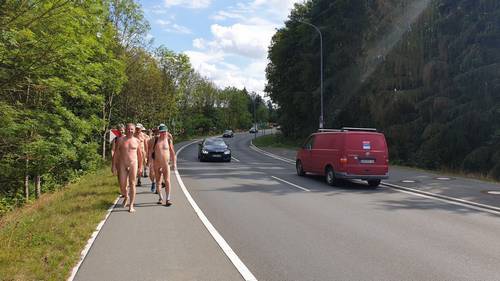 We could choose one of two ways to move that day: A group of 12 pedestrians hiked their own way, optionally "without anything" profiting by refreshments from a previously parked break car. The circular route around the a dam called Zeulenrodaer Meer led partly over wooded elevated paths above the dam, partly directly along the shore through small villages and to the popular lido. There, most od us couldn't resist taking a refreshing dip in the nude - or mingling with textile-wearing foodies at a booth queuing up for an ice cream. On the further way, we enjoyed some more bathing opportunities, before the group crossed shortly before the destination bungalow village Zadelsdorf, passed a beer garden and a playground and met here like everywhere relaxed people, who returned friendly the greeting of us naturists. 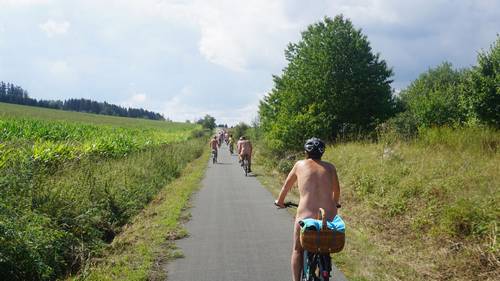 In parallel, 20 nude bicycling fans had made their way to Schleiz to undertake a 40 km round trip from there at the Bleiloch dam. Beginning and end of the tour was on freshly asphalted sections of the "Oberland-Radweg" with mild climbs and descents. At the dam, the nude cyclists overtook a few families with children. Afterwards, they or our group stopped for a break, so tat we encountered each other from time to time during the rest of the tour and soon got into conversation. Above all, hints were exchanged, when the central part of the route along arms of the dam as well as bypass routes proved to be quite challenging for cyclists: Rain during previous days had partly softened the ground of the dirt roads. On the other hand, non-e-bike riders had to switch to pushing on numerous inclines.

Reports about biking in Thuringia

In 2017, Andreas once again initiated Thuringian Naturist Days, this time with 10 events from 14 to 23 July. On Thu 20 July, you could opt for a bike tour near Neuhaus in Thüringer Wald Mounta...

During the Thüringer Naturisten-Tage (TNT) in 2016, there was the option to either hike or bike on 27 July: The tour started with sparkling wine and a choir singing “Happy Birthday” for one of the …