Reports by category: Biking in Westphalia since 2020

At the end of a week of good weather at beginning of September, two more days should bring us midsummer temperatures and sparkling skies before the next lows threaten us again with thunderstorms and heavy rain. Mic had conducted a small survey among naturists in the region, to see, whether there was interest in cycling through the north-western Münsterland on Wednesday. 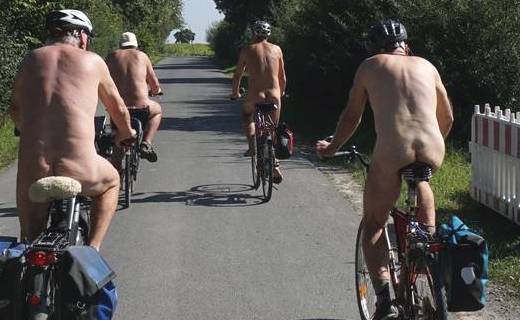 1/3: A small group of bikers in the buff in Münsterland
A total of five nude cycling fans came together to pedal the 40 km circular route. One of them, however, only joined the group at Bahnhofscafé Horstmar, where the cyclists stopped for their lunch break. For him, the start time of 10:30 am was too early because of his long journey to the spot and the cool morning air being not ideal enough for nude cycling for him – instead, he was able to cycle the last 20 km back to the station café in the afternoon in pleasant 27°C air.
The café is located at the old Rheine-Coesfeld railway line, on which passenger traffic was first discontinued in 1984, then freight traffic in 1993. In the meantime, the railway embankment has been transformed into an almost 40 km long Radbahn Münsterland [en: Münsterland Cycle Track], which has become a centre of attraction for cyclists, skaters, and inline skaters due to its minimal gradient and smooth asphalt surface. 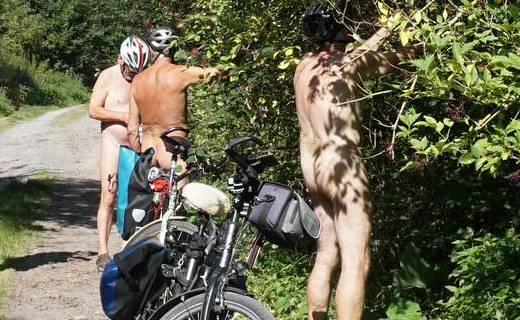 2/3: Harvesting elderberries
The route led through a varied environment of Münsterland with farming districts, fields, and forests. At several places, the naturists could take advantage of the harvest time to pick plump elderberry umbels from the bushes or to taste in between an apple from a tree along the way. 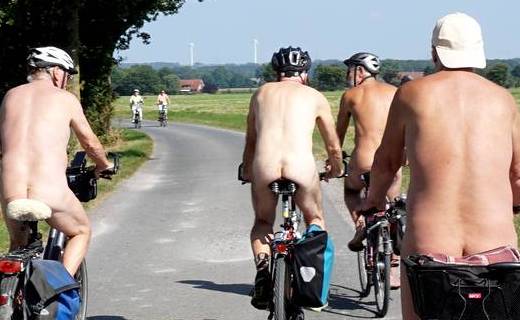 3/3: Sometimes, there was also oncoming traffic.

Reports about biking in Westphalia since 2020

At the end of a week of good weather at beginning of September, two more days should bring us midsummer temperatures and sparkling skies before the next lows threaten us again with thunderstorms an...

A road near Nordwalde served as our meeting point for the hike and the bike ride. 17°C air, a closed cloud cover, and a gusty wind were reason enough for everyone to wear warming clothes at first. But hiking stimulated the circulation, and the first of the participants took the opportunity to  …

After the beginning of summer, the weather offered a lot of sun and warmth around 30°C, so that when cycling you were happy to feel the wind directly on your skin. I thought I knew from storks, that they like to stalk with their long legs through wet meadows and look for frogs, but that they also …

In 2021, the first summery day with maximum temperatures above 25°C took place on Wednesday before Easter. Only a few commercial aircraft, again polluting the atmosphere, disturbed the blue sky. In 2020, natury reported: "[…] There were only a few other cyclists on the paths in the southern …

In 2020, Westälische Naturisten-Tage (WNT) [en: Westphalian Naturist Days] offered on Sunday 5 July again the option to chose between biking and hiking: On Sunday, two groups of 10 naturists each – due to corona regulations – met on a parking lot northeast of Münster (Westf.) near Gimbte. One groupnbsp;…

Nude cyclists are like fresh green: After the long, barren winter, they jump out of their clothes on the very first warm day of the year – directly onto the saddle. As a cyclist, you alwa...