which lasts several days, in western Münsterland and its surroundings up to the Teutoburger Wald Forest is the destination of 9 consecutive days of hikes in the buff, nude cycling tours and other naturist activities such as a nude visit to the Dülmen Ponies. Regional daily newspaper Halterner Zeitung had already prepared its readers in advance for the fact, that again more nude hikers and other active naturists will be on their way in the surroundings. In Westphalia, naturist days are meanwhile commonplace. Encounters with dressed people are as normal, as it would be, when we would be dressed. We get a lot of thumbs up!

The weather initially welcomed the naturists with violent gusts of wind, drizzle and showers as well as cool temperatures. Some tested their physical robustness in the rain, others the protective effect of their rain jackets. Results: The tolerance of the unclad human body against the cooling effect of wind and rain can be astonishingly high, but is quite different in individual cases. One was content with an umbrella and remained undressed until the end, but with shoes, another went barefoot and undressed, then dried himself under the last bridge with a t-shirt and put on a warming jacket. Two of us walked barefoot, while another, who otherwise likes to walk barefoot, stayed in shoes due to concern to get cold feet on the soaked floor – only to find out later, that he now had cold feet, because his shoes and socks were soaked from rain in the meantime.

Don’t worry: From now on, it's improving: A little warmer every day! 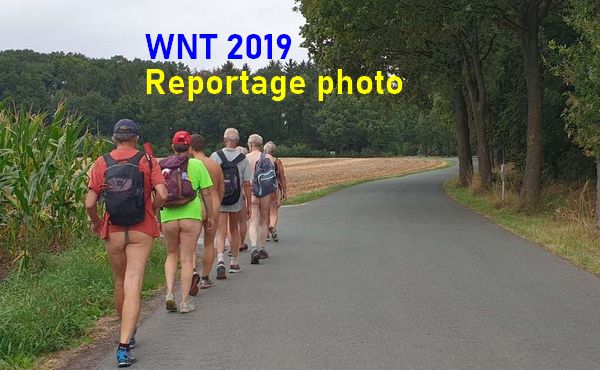 In fact, the late summer weather increased to the announced 32°C on the final Sunday, after the previous days had already offered midsummer weather conditions with blue skies. So, the initial clouds and cool winds were quickly forgotten.

The increased appearance of naturists in forests and fields triggered a benevolent interest of the population in Münsterland – the naturist sports enthusiasts had numerous encounters with locals and were able to answer many frequently asked questions: "Is that really allowed? – Of course! Nature is not forbidden anywhere. | Aren't you cold – Nope, not at all! Twice, however, uninformed fellow citizens, who obviously couldn't classify hiking in the buff properly, called the police. The police officers stated briefly and succinctly, that we are just nude hikers and wished us to still have a nice hike. It is a pity, that there are still people suffering from their own bad fantasies, who distract the police with their unnecessary calls from more important police operations.

The local gastronomy offered good Münsterland cuisine to the hungry naturists after their ventures, which the hikers got as reward for hikes from 15 to 19 km long, the cyclists for tours about 50 km long. The active naturists went from many German states, the Netherlands, and France. They stayed partly on camping sites, partly in hotels, guesthouses, or holiday apartments. On some of the WNT days, more than 30 participants gathered for nudevents, i.e. activities in the nude. They hope, that WNT will remain a permanent institution in the naturist annual calendar of naktivitities.

Also in 2019, the Westfälische Naturisten-Tage (WNT) [en: Westphalian Naturist Days] will again be the largest naturist event, which lasts several days, in western Münsterland and its surroundings...

The Westphalian Beginning of May is a small spring preview of the “Westfälische Naturisten Tage” [en: “Westphalian Naturist Days”] in summer, which usually takes place during 9 consecutive day...