The Westphalian Naturist Days traditionally began on Saturday with a breakfast brunch and skittles in the nude. Afterwards, the assembled naturists started their short hike. It led over the Way of St. James through the Boltenmoor to the canal crossing of the Dortmund-Ems Canal over the Ems River. Although the construction site there has made noticeable progress, it is still a large construction site.

On the way, the naturists met a large group of children, which the accompanying father of the birthday child declared a birthday hiking group. “Ha, ha, ha, they're completely nude!” and similar shouts rang out from children's mouths across the canal. Some time later, after crossing the horse farm Nahrup, the children's group and the hikers in the buff met again and exchanged some funny sayings. Well, they have something to tell, when they come home!

On Sunday, two groups of 10 naturists each – due to corona regulations – met on a parking lot northeast of Münster (Westf.) near Gimbte. One group had planned a hike at the Dortmund-Ems Canal, the second group took a 41 km long circular route by bicycle.

Two policewomen came to us in the parking lot. “You don't look like, it was you, who called us. But we had to come here, because of a phone call and check up on you. Of course, you're allowed to hike or cycle nude, and you all seem to know, how to conduct yourself nude in public.” We explained that we had split into two groups of 10 people each and that we would comply with the corona regulation. At the end of the short conversation, the policewomen wished us a nice day – we gladly returned this wish.

For the cyclists, the strong wind, which at times was accompanied by drizzle and some rain, and the air temperature of around 20°C was so inviting, that only some participants completed the tour without any clothing at all. The highlights were the visit of wooden sculptures at Coerde and the observation of storks, which didn't let themselves be disturbed by the numerous Canadian geese scurrying around, looking for food in a meadow.

The hikers were amazed at the food offerings of the Oeding Restaurant, which were provided with current keywords (species-appropriate, sustainable …). They then shortened the hiking break “Track swimming in the Ems” to 150 m, because they too had to wait until late afternoon for warm sunshine.

'Metelener Heide' [en: Metelen Heath], a landscape characterised by light heather sand west of Steinfurt, is a destination most visitors head for a visit to the so-called dinosaur zoo, which was built on the site of a former bird park. However, directly around the zoo entrance, there is a largely primeval natural landscape, in which you may hike on marked hiking trails or along unmarked paths.

The naturist hiking group started their Tuesday tour with a closed cloud cover, strong wind, and drizzle, so that only some of the participants did not want to wear clothes at all, others needed some protective clothing.

Just in time before reaching a bathing lake, summer sunshine provided by sufficiently large cloud holes turned the stay at the lake into a pleasant hiking break. But in the afternoon, some heavy rain started again, so that some of us chose a direct shortcut back to the car park.

The remaining naked hikers could then enjoy sunshine once again. On the way on the sandy heathland paths, they honoured among other things the monument of a place of execution from the Middle Ages. They let end the varied day in nature together in the Leuters Inn in Metelen.

After a weather-related break on Wednesday and Thursday, the naturist days were resumed on Friday. The day began optionally with a hike or a bicycle tour in the Merfeld area, whereby the hiking route ran partly in a stream bed of a creek. During the creek section wading in the Kannebrocksbach Creek, it started to dribble slightly again. So, we got special memories like “Naturist barefoot in the brook with umbrella”. The last part of the hike through the forest was pleasantly warm.

The end of the day was – as in 2019 – a nude visit to the enclosure of the Dülmen Ponies, for which there was again a great demand. Instead of sun and warmth, a strong, cool wind were the constraints.

Even some tough naturists have put on a windbreaker at times. What a contrast to the ponies, that are outside all year round without a stable and of course without clothes. They might only change from open pasture to the next piece of woodland, because they don't like rain. There it is of course neither dry nor windless, but less wet and windy than on open pasture.

One mare had apparently completely forgotten the shyness inherent in these wild animals and curiously approached one of the visitors almost to the point of physical contact. Between the tips of the tactile hair on her nostrils and the human hand, there was only a few centimetres distance. The movement of a finger was then sufficient to trigger a shying, jumping and running away.

In addition to the informative lecture by the forester Friederike Rövekamp, which turned into a lively question and answer session, the direct encounters with the untamed ponies were an impressive experience.

Georg has summarised his impressions concerning the options to cycle instead of hiking and to visit the Dülmen Ponies in a report with photos:

"On Friday, Mic and Rainer led us to the Dülmen Ponies in Merfeld near Dülmen. Our start was shortly after 11 o'clock, 7 cyclists and about 12 women and men made their way through the park landscape around Coesfeld, Lette, and Dülmen.

Only 1 participant of the cyclists was in the nude from the start. In the beginning, it was cold and humid. During the second break at a creek, we all could let the sun shine on our bodies! Then, the cyclists exchanged their clothes for almost a windbreaker. We were filled with a wonderful feeling of freedom! It was the pure pleasure! The paths were very close to nature and perfectly selected!

After 48 km, we cyclists came back to our starting point at about 3:30 pm. We all, cyclists and hikers, were at the parking lot of the Dülmen Ponies at 5 pm, where Ms Röwekamp, a forester in the service of the Duke of Croÿ, warmly welcomed and then guided us to the Dülmen Ponies in an amiable manner with great sensitivity. Filled with lots of information, a great day with the group of naturists full of good conversations and silence concluded. I happily rode my bike back to Dülmen and from there by train to Münster. Arrived at home, I was on the road for a total of 88.5 km. I slept very well! Thanks to Mic and Rainer for the great preparation and all the effort!"

On the eighth day of WNT 2020, after a few hikes with rain showers and two cancelled nude activities, because it rained heavily, the wind blew cold, and a closed cloud cover did not let warming sunrays through to us, we had hiking weather again: cheerful, a few clouds, low wind, at the beginning still a bit cool, later warm, so that most of us gradually took off our clothes and hiked relaxed in the buff.

We accepted the rain of the last days as a gift of nature. Water is life! Klaus from Rhineland-Palatinate said: “Send the rain to us. Where we live, it's totally dried out.” We saw intact trees full of green leaves, green fields and meadows. A pond, which we had found completely dried out in 2018/19, was full of water again. A heron had found its pantry there. Also the boggy-wet areas in Venner Moor: Brown and dried-out in 2018, now green, damp, and full of life again, so that the log paved path in the Venner Moor fulfilled its purpose again.

In between, we had to change our hiking route along the Dortmund-Ems Canal, because construction work is taking place there for a long time: A bridge over the canal, over which the country road L884 'Kappenberger Damm' is led, was newly built and will still be moved to its intended position. In preparation, the footpaths and cycle paths on both sides are closed for about 1 km. Some people don't mind: They bypass the barriers and continue walking and cycling there, which is possible at the weekend because construction work is then suspended.

We preferred to stick to the rules, walked a bit along the country road on a foot- and bicycle path, then turned north at the next opportunity for a detour of about 500 m, enjoyed the peace and quiet of nature, friendly encounters and a long conversation with a local carpenter, who was very interested in our lifestyle. Then again streets and bridge to return to the south side of the canal. Also on the bridge, we had friendly encounters with families who obviously enjoyed it, when they saw us. Afterwards at the canal and in the moor again calm and nice conversations, with families who were interested in our lifestyle. One family told us, that they were going on a nude holiday to 'Euronat Centre naturist' in France the next day.

We got a report by Thomas concerning his impressions of this day's nudevent:

From 10 o'clock on, first hikers arrived at the car park to start the hike from. Mic and Rainer had again prepared the tour very well. As more than 20 participants had registered, several groups were formed in accordance with Corona protection measures, which started seperately one after another.

In the beginning, it was still a bit fresh and our brave “girls” were still a bit “hidden”. This was subject to change during the day, which is why the sun was smiling more and more.

Past large grain fields, fruit trees full of sweet fruits and juicy meadows with hungry, but also curious cows and bulls, our way led through the farming communities. Everywhere we noticed, that farmers had sown strips of meadow flowers at the edge of their fields. A true flower splendour in many bright colours … 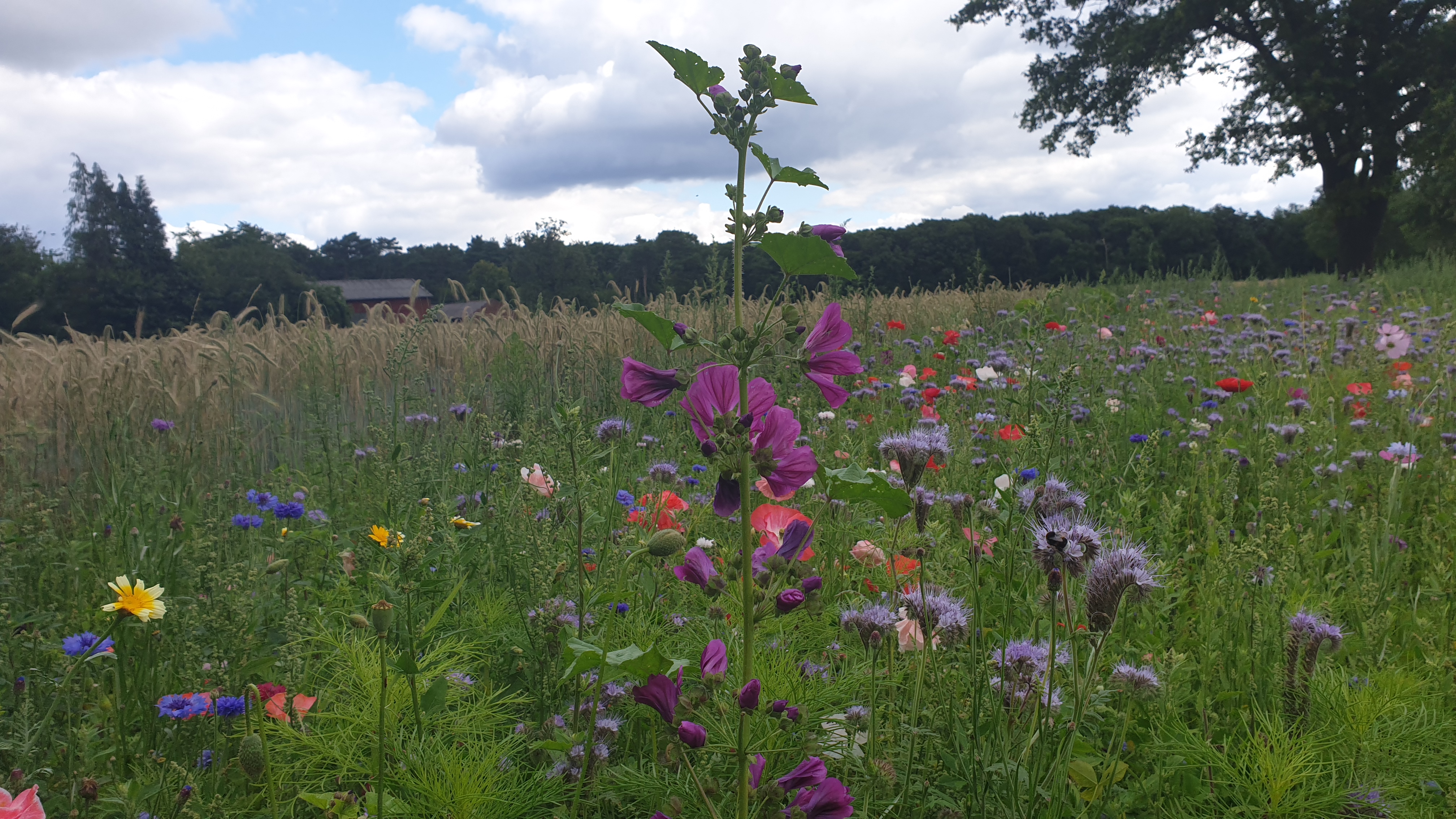 The final day of the WNT led the naturists to the Hohe Mark, a forest area west of the city called Haltern am See. Summer had returned with sunshine and temperatures pleasant for hiking. The area is a popular walking area, so the two nude hiking groups often had encounters with couples, families, or groups, often accompanied by cheerful encouragement or interestnext Westped questions.

We also got in touch with a police patrol interested to know, if everything was alright and when the next Westphalian Naturist Days will take place. We could not yet give a fixed date, but at least inform those police officers about the URL www.nackt-wandern.de [en: www.hiking-in-the-buff.info].

Since 1989, the Tree of the Year has been awarded, and a tree of the respective species has been planted every year in the Hohe Mark along the path “In der Brake”, so that this path has become an avenue of Trees of the Year.

hiking in the west of the Münsterland region included – quite unusually – a climb and after the ascent to Galgenberg Height, where a fire watchtower provides a lookout above the treetops, often through narrow paths framed by ferns and finally past the Waldschenke, a tavern in the middle of the forest, back to the starting car park. The day and the WNT 2020 as a whole concluded at the restaurant Haus Waldfrieden in Börnste near the city Dülmen, where delicious food and refreshing drinks awaited the hikers.