Short, dark winter days, together with restrictions to stem Corona infections, were already stressful enough for people. The onset of winter in February with unusually extensive snowfall and persistent frost causing road and rail traffic to collapse in many places in North Rhine-Westphalia, restricted life even further. 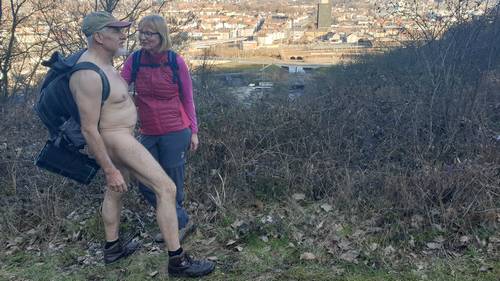 Suddenly and just as unexpectedly, the air temperature rose by more than 30°C: Early spring arrived with 20°C warmth and 10 hours of sunshine – almost no one could stay indoors. Get out and enjoy nature, was their personal order of the day for many: The first birds were chirping their mating calls, and next to a few remnants of snow, colourful spring blossoms rose up between brown leaves and thin greenery.

Also, a few naturists took advantage and went on their first nude hike of this year in a city forest of their home town Hagen in Westfalia, less than 1000 metres from the main train station. The hike was delightful for more than two hours. In between, we took a break on a bench in the sunshine with coffee and cake, which Thomas had carried. We exchanged spring greetings and good wishes with many other people along the way.