Westphalian Naturist Days (WNT) started in 2021 with a 16 km hike over the western foothills of the Teutoburg Forest between Ibbenbüren and Riesenbeck with 18 naturists from Belgium and all kinds of German regions. The Hermannsweg as the most famous hiking trail in the Teuto was of course also presented. 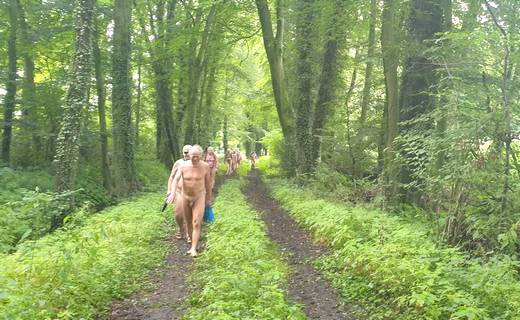 After a steep ascent, the hike first led to a former quarry with views of the almost vertically sloping sandstone walls. Ibbenbüren sandstone was quarried here for a long time. Today the area is leased to a climbing association and fenced off for safety. A large white “H“ on the ground marks the landing site for rescue helicopters. 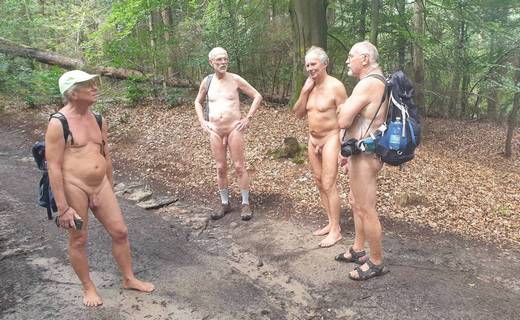 17°C air temperature at the start of the hike and overcast skies increased to 23°C in the afternoon with alternating sunshine and occasional raindrops. The dark sky on the smartphone's rain radar was then the reason to shorten the route a little - but unnecessarily, because soon after the decision, the dark clouds passed. 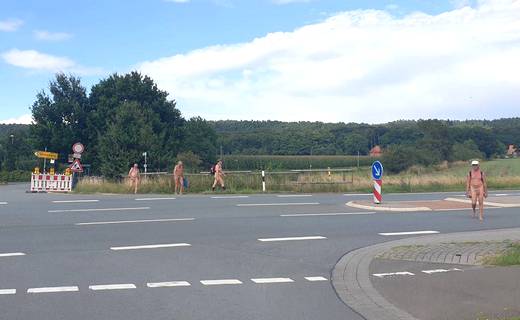 The last part of the hike led along the Dortmund-Ems Canal in sunshine, which of course some took advantage of for a swim. An optional conclusion was a visit to the Botanischer Garten Loismann [en: Loismann Botanical Garden], where a sequoia tree is the best-known representative of exotic plants. In addition, however, there are numerous other botanical attractions to admire – and today, in addition, the eagerness of the nude hikers to learn.

Final promenade along the canal 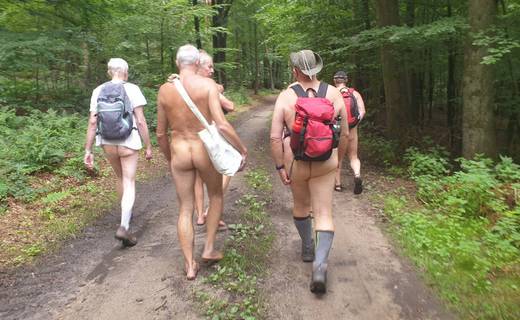 Translation of a German definition of Premiumwanderweg [en: Premium Hiking Trail] by wanderinstitut.de:

Our Sunday hike started at a car park north of Riesenbeck in the Teutoburg Forest and led along the Hermannsweg and a section of the premium hiking trail called Waldroute over the northern slope of the Teuto down into Tecklenburger Land towards Püsselbüren. We passed the DA-Kunsthaus Kloster Gravenhorst, a former monastery, since 2004 Denkmal-Atelier, and followed the small river Hörsteler Aa to our resting place at the Mittelland Canal. 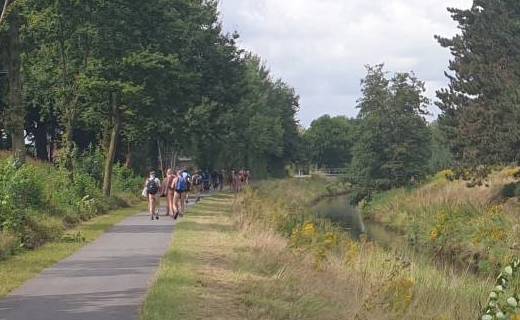 with a length of 325.3 kilometres, is the longest artificial waterway in Germany and (after the Kiel Canal) the second most important in the east-west direction. Here in the west, it joins the Dortmund-Ems Canal (DEK). We followed the Dortmund-Ems Canal for a short while and then climbed back up into the Teuto above Riesenbeck. With views over Riesenbeck and into Münsterland, we soon reached the Hermannsweg again and found our way back to our starting point via narrow paths. 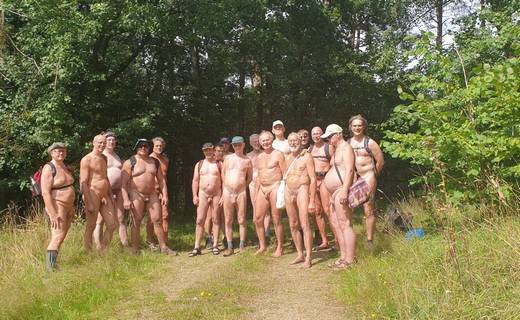 12/15: Today's group of nude hikers on the Hermannsweg
Despite moderate weather forecasts, we were lucky: After starting clothed, to protect ourselves from cool gusts of wind, we were soon able to take off our clothes to enjoy nature and interspersed sunny moments without clothing. During the two Teuto days, we covered a total of 31 km and 660 m of difference in altitude. Many hikers, walkers, cyclists and steersmen from freighters and private ships, who met us, returned our greetings in a friendly manner and waved.
– Report: Rainer; photos: Rainer, except denoted ones